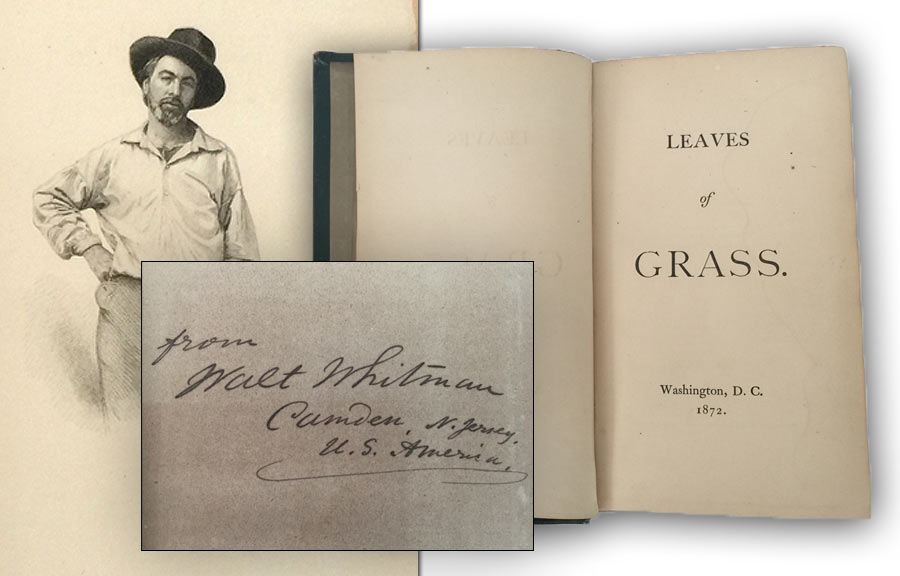 This unique and incredibly rare 1872 first edition presentational copy of “Leaves of Grass” has been signed and inscribed by poet Walt Whitman.

Whitman has written, in ink: “From Walt Whitman, Camden N. Jersey, U.S. America”, a nice tie-in with the fact that he relocated from Washington, DC to Camden, New Jersey in early 1873 due to the negative health effects of a stroke.

The frontis of this copy has been tipped in and features the famous portrait of a young Whitman. This youthful steel engraving was used for earlier editions of “Leaves of Grass” including the first edition of 1855. On the reverse of the engraving, the initials “W.W. 1854” have been hand written in pencil.

This copy is different to any other Washington copy in that the engraving is from the first edition rather than the full page, full-length portrait of an older Whitman which is seen in every other 1872 Washington edition. This leads us to believe that this could be a proof edition of the first issue.

Signed Walt Whitman books come up for auction very rarely. This copy is truly unique and a very important find.

In 1873, Whitman suffered a demoralizing paralytic stroke and moved from Washington, DC to the home of his brother, George Washington Whitman, in Camden, New Jersey. His mother, also ill, died that May, leaving Whitman considerably more depressed during this time.

While in residence at his brother’s home this year, Whitman was extremely productive, publishing three versions of “Leaves of Grass” among other works. He was also last fully physically active in this house, receiving both Oscar Wilde and Thomas Eakins.

If you’re interested in selling a signed Walt Whitman book or first edition at auction with us, check out our antique books consignment page for more information.

Looking to buy a similar signed Walt Whitman book at auction? Get an email notification next time something like this comes to auction.
Get Auction Alerts

We offer complimentary auction evaluations for high quality items such as this Walt Whitman Signed “Leaves of Grass” Presentation Copy, 1872.
Consign an item