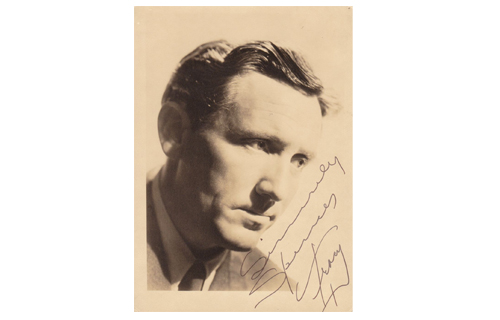 This vintage movie studio fan photo has been autographed and inscribed by Spencer Tracy. Measuring just 5″ x 7″, photos like these were printed in the millions by the studios to send to fans who wrote in requesting autographs of their favorite stars.

Most often, these small photos will bear pre-printed, stamped or secretarial signatures, but occasionally some are genuinely signed.

The photo was consigned to our auction as part of a large collection of movie star autographs collected by a woman who worked in the motion picture industry during the 1940s. She befriended many of the major stars of the day and managed to collect quite a few in-person autographs.

Typically these vintage movie star fan photos only have a low value at auction; depending on the actor or actress featured, such photos tend to sell anywhere between $2 – $50 each. While this fan photo of Spencer Tracy sold at auction for $113 due to its relatively small size, a larger 8″x10 size photo with a quality inscription and authenticated Spencer Tracy signature can sell for several hundred dollars at auction.

Serious collectors of celebrity autographs will usually prefer larger sized signed photos rather than these small promo pieces, but the fan photos are a great entry level into collecting classic movie star autographs.

If you’re interested in selling a Specer Tracy autograph or collection of autographs at auction with us, check out our Hollywood memorabilia consignment page for more information.

Looking to buy a similar Spencer Tracy autographed photo at auction? Get an email notification next time something like this comes to auction.
Get Auction Alerts