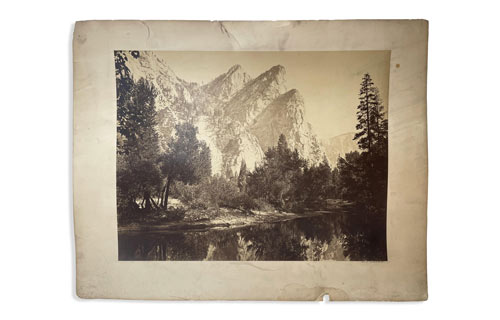 “The Three Brothers”, a circa 1865 mammoth plate photograph by C.E. Watkins, signed in ink. The title is written in pencil and believed to be in Carleton Watkins’s hand (although the writing is mostly indecipherable due to wear.)

This mammoth plate photograph measures a very large 20.25” by 16”; measured with its matte it comes in at 27” x 21”. Mammoth plates (essentially fragile glass plates) were expensive to make, easy to damage and cumbersome for a photographer to deal with – especially out in the wild country.

Landscape photographer Carleton Watkins made his first trip to Yosemite in the autumn of 1861 and produced thirty mammoth plate and one hundred stereoscopic images of the awe-inspiring California scenery. His camera lens captured the stunning sites of Yosemite valley including Half Dome, Cathedral Rock, El Capitan and so many other views.

These images, among the first of this part of the country to be seen by those back east, served as motivation for Congress to pass legislation signed by President Abraham Lincoln that preserved Yosemite, eventually allowing it to become one of America’s most popular national parks.

Sadly, C.E. Watkins’ personal collection of his prints and negatives were lost in the fire which ensued from the 1906 San Francisco earthquake.

Looking to buy a similar mammoth plate photograph at auction? Get an email notification next time something like this comes to auction.
Get Auction Alerts