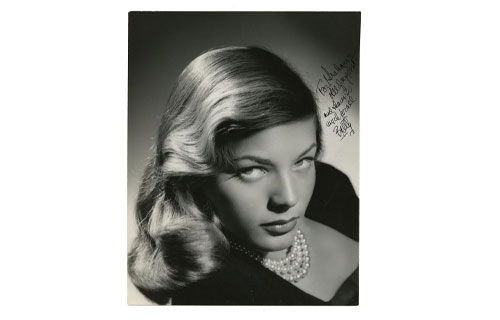 Beautiful, vintage 1944 Bert Six portrait of Lauren Bacall wearing pearls to publicize her role in “To Have and Have Not”.

Bacall has signed and inscribed a message to Warner Brothers’ publicity man Robert Graham Wahn: “For Graham – All of my best and thanks so much for all. Betty.”

Here, Bacall uses her real name, Betty, as she often did with more intimate acquaintances, friends and family.

The 1944 film dramatization of Ernest Hemingway’s novel, “To Have and Have Not” marked the first screen coupling of Humphrey Bogart and Lauren Bacall, whose sizzling chemistry on screen led to their real-life love affair.

The studio stamp of Hollywood photographer Bert Six appears on the reverse side of the photo. During Hollywood’s heyday, Six was head of the still department at Warner Brothers studio. He excelled at producing glamour portraits of beautiful actresses, first beginning his photographic work in 1934 and eventually reigning over the movie studio’s still department in the 1940s.

Looking to buy a similar autographed movie photo at auction? Get an email notification next time something like this comes to auction.
Get Auction Alerts