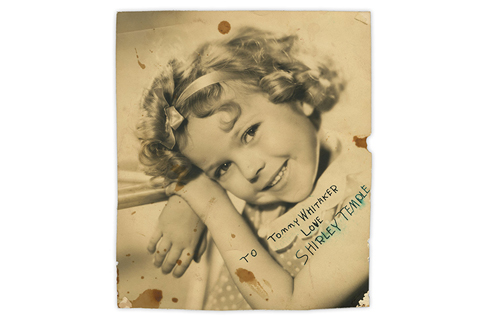 It is much less common to find a Shirley Temple signature in childish block letters like this; the only other authenticated example we were able to find sold at Heritage Auction in 2004 for $800 and was written very similarly to this.

Temple was Hollywood’s number one box-office draw as a child actress from 1935 to 1938, and it was during this period that this photograph was obtained.

Shirley began her film career at the age of three in 1932. Two years later, she achieved international fame in Bright Eyes, a feature film designed specifically for her talents. She received a special Juvenile Academy Award in February 1935 for her outstanding contribution as a juvenile performer in motion pictures during 1934. Film hits such as Curly Top and Heidi followed year after year during the mid-to-late 1930s.

This photo was consigned to auction by the descendants of a wealthy and influential Beverly Hills, California family who were regular participants in the high society of Hollywood during the 1920s – 1940s.

Headed by Francis Whitaker, whose wife was an occasional actress, the Whitaker family lived on Bedford Drive in Beverly Hills and had several friends in the movie business including Philo McCulloch, Donald McDonald, Hoot Gibson, William Morrissey, Midgie Miller, and Gertrude Childs Huntington.

All of the inscribed photos consigned in the collection are dedicated to Thomas Whitaker (1923-2009), the rich young son of the household, then in his early 20’s.

If you’re interested in selling a Shirley Temple signed photo at auction with us, check out our Hollywood memorabilia consignment page for more information.

Looking to buy a similar signed Shirley Temple photo at auction? Get an email notification next time something like this comes to auction.
Get Auction Alerts