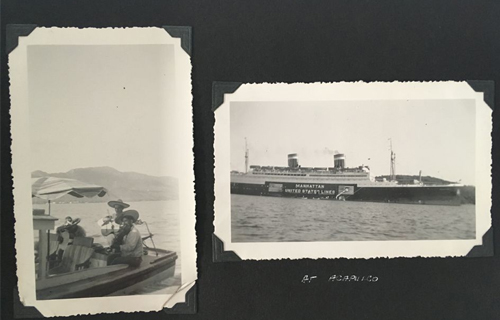 This nearly compiled vintage photo album documents a trip aboard the S.S. Manhattan ocean liner of the United States Line in 1940. We sold the photo album for $136 at auction.

The album contains 31 snapshot photos of the ship itself, views from aboard ship, passengers in deck chairs, a life boat drill, sports on deck, etc.

It’s always helpful when old photos are captioned, and thankfully this sea voyager was good enough to carefully label each photo with descriptive captions, such as the October 2, 1940 voyage from San Francisco, California, the ship’s departure from Los Angeles at Catalina Island, sailing past Acapulco, Mexico, viewing the Fort of San Diego, arriving at the coast of Central America, the ocean views at sunrise at Havana, Cuba, disembarking at New York with the ship’s crew members, views of New York harbor and the city skyline along with the Statue of Liberty.

Just eight months before these photos were taken, the Manhattan had been seized by the British in Gibraltar during the early part of WWII and released after 390 sacks of mail bound for Nazi Germany were confiscated. From January 1940 until Italy’s entry into World War II in June 1940, the SS Manhattan sailed between New York and Genoa.

On June 6, 1941, the Manhattan was requisitioned and leased by the US Navy, and was subsequently commissioned as the troopship USS Wakefield just days afterwards. Small black and white snapshots (measuring 3″ x 5″) include photos of the Manhattan itself, views from aboard ship, passengers in deck chairs, a life boat drill, sports on deck, Contemporary 1940’s dark blue colored scrapbook photo album measures 11.5″ x 7.25″ inches.

If you’re interested in selling ocean liner photos or memorabilia at auction with us, check out our consignment page for more information.

Looking to buy a similar ocean liner photo album at auction? Get an email notification next time something like this comes to auction.
Get Auction Alerts