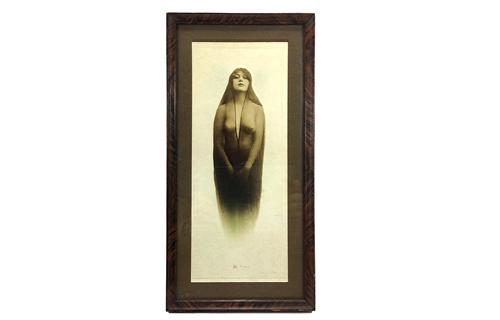 This portrait – purported by legend to be Josie Earp, shows a beautiful young woman, scantily clad in a sensual, revealing shroud. Marked “Kaloma” by the Pastime Novelty Co. of New York, it is presented in its original frame dating to circa 1911.

Josie “Josephine” Earp (1861-1944) was the common-law wife of Old West legend Wyatt Earp. In 1967, a book entitled “I Married Wyatt Earp” was published by Glenn Boyer, ostensibly as Josie’s memoir of her relationship with Wyatt Earp and her life and times in early Arizona Territory. In the ensuing years, the “memoir” has been debunked as being a likely fraud with inaccurate information.

In fact, it was Earp historian Glenn Boyer who first originated the idea that the mysterious portrait was indeed a picture of Josie Earp and ended up using it on the cover of his book. This confusion has caused much discussion and debate with no clear answer, even all these years later. True West Magazine has an interesting article proposing another potential identity of the woman in the picture.

Looking to buy a similar antique Old West photo at auction? Get an email notification next time something like this comes to auction.
Get Auction Alerts

We offer complimentary auction evaluations for high quality items such as this Kaloma “Josie Earp” Mystery Photo in Original Frame, 1911.
Consign an item