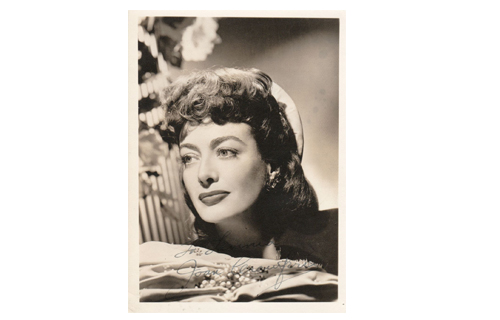 This glamorous portrait of the Joan Crawford dates to the mid 1940s and is a simple movie studio fan photo, measuring 5″ x 7″ inches.

During the golden age of Hollywood, the movie studios produced millions of such small souvenir photos intended to market their stars to fans across America. The 5″ x 7″ size is one of the best still collected today, though studios did print even smaller sizes which can be a bit difficult to display.

A great majority of these small photos carry either pre-printed, stamped or secretarially signed signatures from movie stars. Occasionally, we’ll run across one that bears a genuine signature of the actor or actress, and in this case, the picture’s backstory and provenance can help considerably.

This photo happens to truly be signed and inscribed by Joan Crawford in dark blue ink – “To Lavinia – Joan Crawford.”

The photo was consigned to our auction as part of a large collection of movie star autographs collected by a woman who worked in the motion picture industry during the 1940s. She befriended many of the major stars of the day, including Crawford, who was kind enough to sign this photo for her.

As a general rule, these vintage movie star fan photos that measure 5″ x 7″ or smaller typically only have a very small value at auction; depending upon the actor or actress featured, they can sell anywhere between $2 – $50 each. If they carry a genuine live ink signature of the star, they could be worth double – again, depending upon the star.

Serious collectors of signed movie star photos generally prefer larger photos rather than these small giveaways, but the fan photos are a great entry level into collecting classic Hollywood autographs.

Looking to buy a similar Joan Crawford autographed photo at auction? Get an email notification next time something like this comes to auction.
Get Auction Alerts