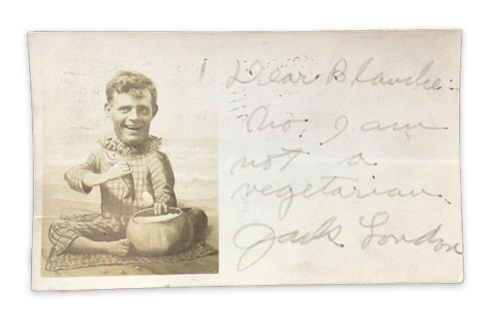 This original postcard includes a message handwritten and signed by author Jack London (1876-1916), featuring a possibly unpublished photo of London, laughing, which appears as the head on a humorous caricature of a man sitting on the beach cooking fish.

London’s message references the image: “Dear Blanche – No, I am not a vegetarian. Jack London.”

London has addressed the postcard to Blanche Partington (1866-1951), a fellow Bay Area literary figure and journalist to her San Francisco, CA address on the reverse. Partington competed for London’s affections, but his heart ultimately belonged to his second wife Charmian London.

The card is postmarked Honolulu, Hawaii, August 9, 1907, indicating that it was sent during London’s Pacific cruise to Hawaii and Australia aboard his yacht, the Snark.

These adventures were later chronicled in his 1911 book, “The Cruise of the Snark”.

Professionally matted and framed by Bryan Nerone & Co., a Beverly Hills dealer and appraiser in original autographed letters, rare manuscripts, documents and fine prints. The piece is framed in a burled wood frame in keeping with the Pacific islands theme, with a clear viewing area on the reverse side so that the handwritten address portion of the postcard is visible.

If you’re interested in selling a signed Jack London first edition at auction with us, check out our first edition books consignment page for more information.

Looking to buy a similar Jack London signed item at auction? Get an email notification next time something like this comes to auction.
Get Auction Alerts