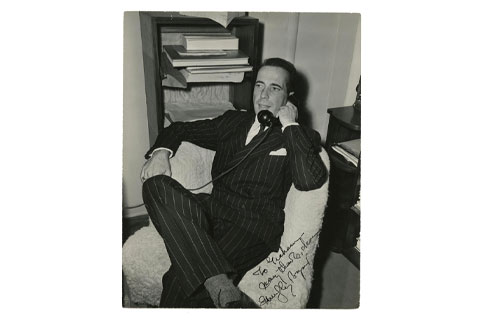 This vintage candid photo of Humphrey Bogart shows the screen legend wearing a pinstripe suit and talking on the telephone in a dressing room, photographed by Floyd McCarty around 1940.

Bogart has signed and inscribed the photo to Warner Brothers publicity man Robert Graham Wahn: “To Graham – Many thanks, dear – Humphrey Bogart”.

This Humphrey Bogart autograph was consigned directly by the family of Mr. Wahn, and according to them, Mr. Wahn had a less than loving relationship with Bogart, which explains the somewhat sarcastic inscription.

Signed Humphrey Bogart photos are highly collected today with Bogie’s popularity never waning. Depending upon the size, format, era or film referenced, Bogie autographs can sell for hundreds or thousands of dollars at auction.

Photographer Floyd McCarty’s credit stamp appears on the reverse. McCarty (1913-1999) was a Warner Brothers set photographer and produced some incredibly iconic Hollywood movie images, including instantly recognizable stills of James Dean for all three of his films (“East of Eden”, “Rebel Without a Cause” and “Giant”).

If you’re interested in selling a classic Hollywood signature or Humphrey Bogart autograph at auction with us, check out our Hollywood memorabilia consignment page for more information.

Looking to buy a similar Humphrey Bogart autograph at auction? Get an email notification next time something like this comes to auction.
Get Auction Alerts