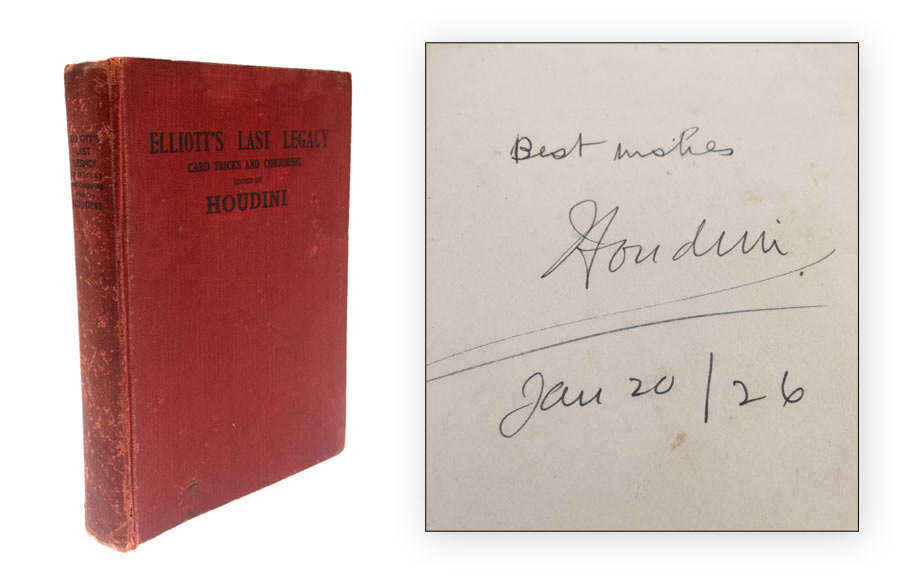 We sold this first edition (1923) copy of “Elliott’s Last Legacy Card Tricks: Secrets of the King of All Kard Kings”, signed and dated by Harry Houdini, for $880. Published in New York: Adams Press, 1923.

Dr. James Elliott’s work is collectible book on magic as it holds the secrets to over 100 magic tricks, edited by Harry Houdini after Elliott’s death.

Houdini’s signature and inscription is dated January 20, 1926, just ten months before his tragic death on Halloween of 1926.

Harry Houdini was in Washington D.C. at the Shubert-Belasco Theater for a week of magical stage performances commencing on January 18, 1926. It was during this week that he signed the Elliot book.

In addition to his act, Houdini appeared before the Washington Federation of Churches to make a presentation on his findings on fortune tellers and fraudulent mediums on Tuesday, January 19, 1926, the day before signing this copy of the book.

Harry Houdini wrote of his first interaction with magician James Elliot, that Elliot handled cards “with the dexterity that can only be acquired by a passionate love of magic and years of training.”

Dr. James William Elliot befriended Houdini while attending college in Boston. Williams gave up medicine for a decade to tour with the magic act Le Roy, Talma, and Bosco. He was also the treasurer of the Magic Mystic Fraternity which was the only magical society in existence at the time – 1898.

Elliot was believed to be the inventor of the Back Palm with cards which he taught to T. Nelson Downs. Dai Vernon “The Professor” who was famously noted for “The card trick that fooled Houdini”, apparently said that Elliott saw the Back Palm performed by a Mexican gambler.

Harry Houdini collected Dr. Elliott’s notes and filled in some of the explanations, ultimately published in this book “Elliott’s Last Legacy” with the help of Clinton Burgess.

Burgess became bitter towards Houdini, believing that Houdini took most of the credit for this book.

If you’re interested in selling a Harry Houdini autograph or Houdini memorabilia at auction with us, check out our magic collectibles consignment page for more information.

Looking to buy a similar Harry Houdini signed book at auction? Get an email notification next time something like this comes to auction.
Get Auction Alerts