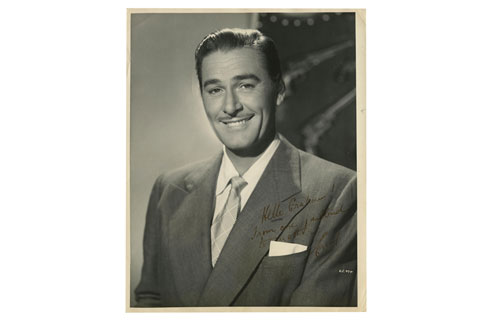 Vintage circa 1948 oversize, double weight portrait of Errol Flynn, signed and inscribed to Warner Brothers’ publicity man, Robert Graham Wahn, who classed Flynn as one of his favorite stars to work with, and with whom he was jailed in 1948 for an incident in New York.

Flynn’s unique inscription on this photo references the police incident which ended up in the press when the two men were arrested after an argument with NYC patrolmen who halted a taxi in which they were passengers. In the police station, Flynn allegedly kicked a policeman and was booked on an assault charge; Wahn was charged with disorderly conduct. The two were bailed out by the owner of New York’s El Morocco nightclub.

“Hello Graham! From one jailbird to another. Errol.”

This wasn’t Errol Flynn’s only jail stint – he was famously put on trial in 1943 with a charge of statutory rape, a case which made major headlines in Hollywood and around the world and made the phrase “In Like Flynn” a cheeky household expression.

This autographed piece was consigned directly by the family of former Warner Brothers publicity man Robert Graham Wahn, who worked public relations and acted as chaperone and sometime bodyguard to various stars in the 1940s and 1950s during their visits to New York City. Mr. Wahn archived many signed photographs and publicity stills through his tenure with Warner Brothers.

Looking to buy a similar Errol Flynn autographed photo at auction? Get an email notification next time something like this comes to auction.
Get Auction Alerts