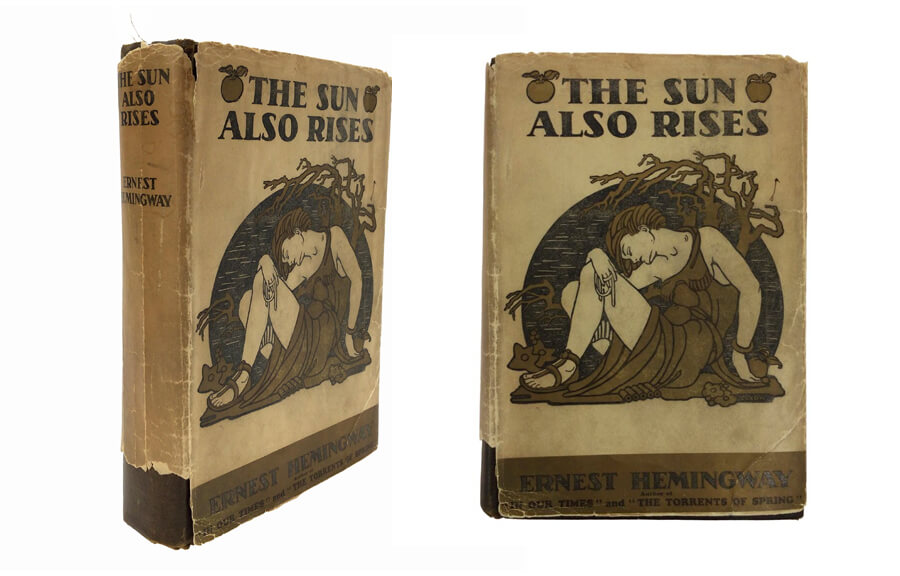 Published by Scribner’s in 1926, the first printing of Hemingway’s novel had an original print run of 5,090 copies. The story involves early Hemingway mentions of his passions, bullfighting and the running of the bulls which feature in some of his later works.

This copy sold at auction for $14,739 and includes the original first-issue dust jacket which lists “In Our Times” on the front panel. The book itself includes the telltale errors which identify it as a first printing including the misspelling of the word “stoppped” at p.181, line 26; the “Book Three” reading, and the misspelling “Down-staris” on p.169.

In 1930, “The Sun Also Rises” was banned in Boston and banned in Ireland in 1953 because of its language and its focus on sex and promiscuity.

This is a very collectible copy of Hemingway’s debut novel and especially of the rarely seen original dust jacket.

If you’re interested in selling a first edition of “The Sun Also Rises” or any Ernest Hemingway novel at auction with us, check out our first edition books consignment page for more information.

Looking to buy a similar Ernest Hemingway first edition at auction? Get an email notification next time something like this comes to auction.
Get Auction Alerts

We offer complimentary auction evaluations for high quality items such as this Ernest Hemingway’s “The Sun Also Rises”, 1926 First Edition.
Consign an item