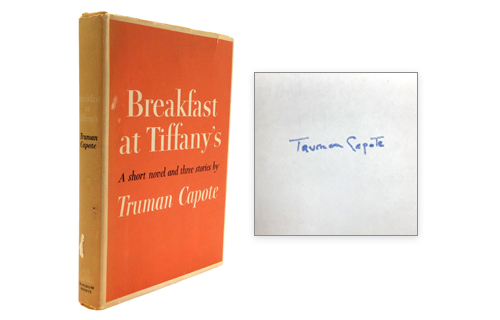 Additionally, the novella has been signed by Truman Capote. The dust jacket retains its original $3.50 price to the top of the front flap and 10/58 to bottom; it is not price-clipped.

It’s been said that Capote’s choice for the actress to portray the screen version of Holly Golightly, arguably one of his most famous characters, was Marilyn Monroe. Though Capote’s original Holly Golightly was indeed envisioned as a blonde, Monroe was advised to turn down the part by acting coach Lee Strasberg with the reasoning that the “call-girl” role wouldn’t be great for her career. By the time the 1961 movie was in the works, Capote had sold the rights to the story to Paramount Pictures and their choice for the plumb role was Audrey Hepburn.

The film version went on to be a cinema classic, earning an Academy Award nomination for star Audrey Hepburn and the Oscar for “Moon River” as Best Original Song of 1962.

If you’re interested in selling a first edition of “Breakfast at Tiffany’s” or any first edition Truman Capote novel at auction with us, check out our first edition books consignment page for more information.

Looking to buy a similar signed first edition at auction? Get an email notification next time something like this comes to auction.
Get Auction Alerts