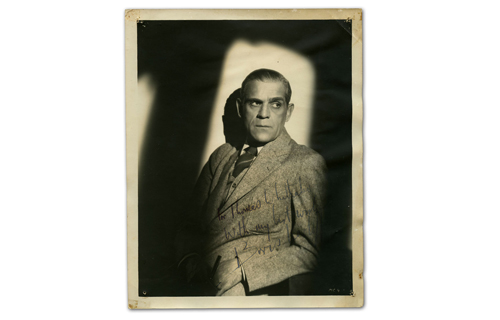 It’s a great portrait of Karloff, showing the actor in a three-piece suit, framed by a dramatic shaft of light. Most famous for his roles in legendary horror films, Karloff portrayed Frankenstein’s monster in “Frankenstein” (1931), “Bride of Frankenstein” (1935) and “Son of Frankenstein” (1939). He also appeared as Imhotep in “The Mummy” (1932). In later years, he hosted the spooky “Thriller” television series.

The reverse side of the photo is stamped GARUMONT-BRITISH / COPY in purple ink. In the United States, Gaumont-British film company had its own distribution operation for its films until December 1938, when it outsourced distribution to 20th Century Fox.

This photo was consigned to auction by the descendants of a wealthy and influential Beverly Hills, California family who were regular participants in the high society of Hollywood during the 1920s – 1940s.

Headed by Francis Whitaker, whose wife was an occasional actress, the Whitaker family lived on Bedford Drive in Beverly Hills and had several friends in the movie business including Philo McCulloch, Donald McDonald, Hoot Gibson, William Morrissey, Midgie Miller, and Gertrude Childs Huntington.

All of the inscribed photos consigned in the collection are dedicated to Thomas Whitaker (1923-2009), the rich young son of the household, then in his early 20’s.

If you’re interested in selling a Boris Karloff signed photo at auction with us, check out our Hollywood memorabilia consignment page for more information.

Looking to buy a similar signed Boris Karloff photo at auction? Get an email notification next time something like this comes to auction.
Get Auction Alerts