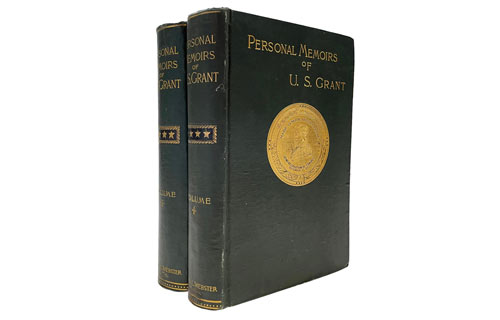 President Ulysses S. Grant’s autobiography became one of the best selling books of the 19th century and was published in two volumes, including an engraved portrait frontispiece, a folding facsimile letter in volume one; a folding map and facsimile document in volume two; along with numerous maps and wood engravings throughout. This edition is presented in its original illustrated dark green cloth gilt.

President Grant’s memoirs were published by Mark Twain in 1885 not long after Grant’s death widely published. An ingenious marketer, Twain created a marketing campaign for Grant’s autobiography in which Civil War veterans, dressed in their old military uniforms, went door-to-door offering the two-volume set for sale. The cost varied between $3.50 to $12 per set, with the price difference dependent upon the binding – available were the “plain” dark green cloth binding, or a luxurious leather bound edition.

Leather editions or more beautifully bound editions of the Personal Memoirs of U.S. Grant tend to be more highly prized by collectors at auction if found in fine condition.

Conversely, single volumes of the memoir, or those in plain binding or in poor condition, have been known to sell at auction for as little as $10, so the importance of the first edition, fine condition and lovely binding are incredibly important in terms of potential auction value.

Twain’s plan capitalized on the nation’s mourning for the 18th President, and the technique paid off with the sales of some 350,000 two-volume sets in advance of the book’s actual printing.

If you’re interested in selling a first edition American book at auction with us, check out our antique book consignment page for more information.

Looking to buy a similar first edition U.S. Presidential autobiography or biography at auction? Get an email notification next time something like this comes to auction.
Get Auction Alerts