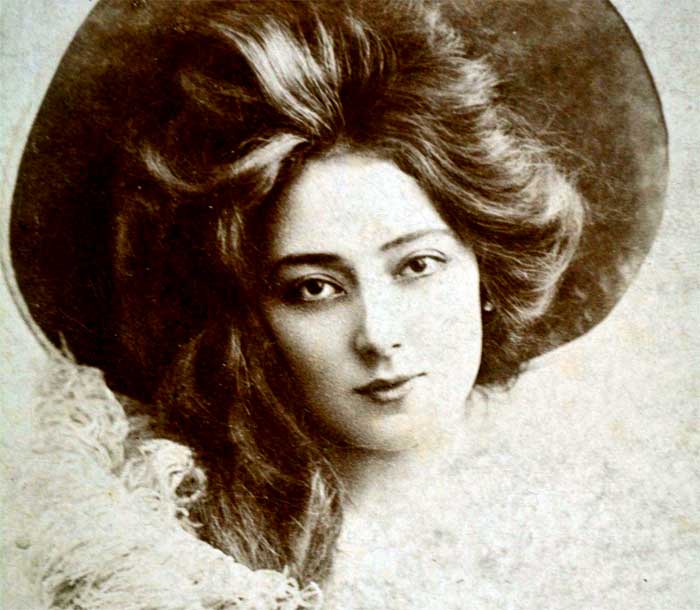 If you’ve ever seen the 1980 film “Somewhere in Time” starring Christopher Reeve and Jane Seymour, you’ll immediately understand the concept of someone falling in love with a long-ago portrait.

The movie tells the story of Richard Collier (Reeve) who, in the present-day, discovers a beautiful portrait of an actress (Seymour) that was photographed in 1912. He becomes obsessed with discovering every detail about her life, and in that course, falls hopelessly in love with her. Through his romantic obsession, he attempts, and succeeds at traveling back in time to meet the young woman.

If you haven’t had the pleasure of seeing this lovely movie, aptly ranked as one of the most romantic films of all time, do yourself a favor and rent it.

We discovered this 1890’s era antique cabinet card featuring the portrait of a hauntingly beautiful French actress, Anna Held. We found the picture to be so captivating, we couldn’t help but be reminded of “Somewhere in Time”. Held wearing a large hat and somehow still manages to show off her luxurious volume of silky hair, such a rarity in turn-of-the-century portraits.

Anna Held was famously romantically linked to Florenz Ziegfeld in the late 1890’s and is credited with suggesting the format of what eventually became his Ziegfeld Follies. Often called vivacious and flirtatious by theatre critics of her time, Held eventually made her way to Broadway where she found much success and by 1905, ended up a millionaire – a major achievement in any era!

Primarily a theatre performer, Held appeared in several short films and only a single feature length silent comedy in 1916. During the first world war, Held entertained the troops and even went so far as to travel to the front lines of battle to visit the young soldiers. Thus, she became a heroine to the public and her fans as she raised huge sums of money for the war effort.