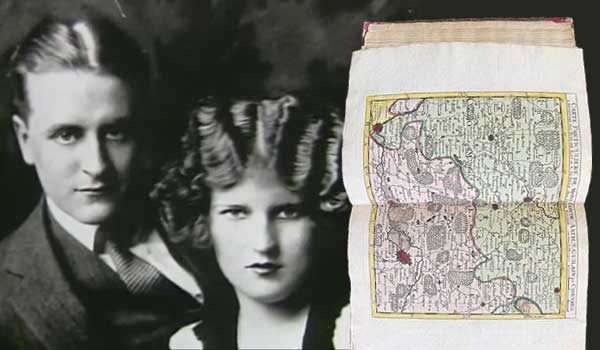 “Though the Jazz Age continued it became less and less an affair of youth. The sequel was like a children’s party taken over by the elders.” – F. Scott Fitzgerald

Jazz Age revels would do well to sober up quickly when confronted with this antique atlas book, which, though colored well within the lines, is definitely not the stuff of a children’s party.

So where does an 18th century Dutch atlas meet the American Jazz Age?

Sounds like a trick question – but the answer is found in this intriguing volume entitled “Reis en Hand Atlas Van Vlaanderen, Braband en Aanleggende Landschappen,” an antique atlas book published around 1750 in Amsterdam.

This particular atlas, while nothing incredible to behold from its cover, once had a very interesting owner in the old south.

For many years, this copy of “Reis en Hand Atlas” was nestled among many other volumes on the shelves of a Montgomery, Alabama woman, Louise Cherry Brooks. No, not the 1920’s movie star, Louise Brooks, so popular for her iconic flapper image on the silent screen, but a southern society gal who just happened to be lifelong friends with the legendary Zelda Fitzgerald.

“A great social success is a pretty girl who plays her cards as carefully as if she were plain.” – F. Scott Fitzgerald

A bookplate bearing the name “Louise Cherry Brooks” is neatly affixed to the atlas, in English a “Travel and Hand Atlas of Flanders, Brabant and Contiguous Landscapes”.

So who is Louise Cherry Brooks? A prominent Montgomery, Alabama resident and collector, Brooks avidly pursued her passion for collecting art and historical books of regional interest. Her large library featured early Americana and Southern History, and her family is dated as one of Alabama’s earliest.

Hundreds of pieces of costume jewelry were discovered in Brooks’ estate following her own death at the ripe old age of 93, no doubt elements of her flapper period in the 1920’s.

In fact, a family Bible, once held in Brooks’ estate, was donated to the F. Scott and Zelda Fitzgerald Museum in Montgomery in 2016, providing a wealth of information about her friend’s family.

In and of itself, the antique atlas is considered to be quite rare and contains 38 beautifully detailed and hand colored maps based then-new observations.

It is believed that these particular maps were designed by Jan de Lat, a Dutch printer and book and map seller, and Jacob Keizer, a cartographic engraver/etcher, and were inspired by the work of cartographer Guillaume de l’Isle (1675-1726).

Want to sell an antique atlas book or map?