What is vellum binding on an antique book? 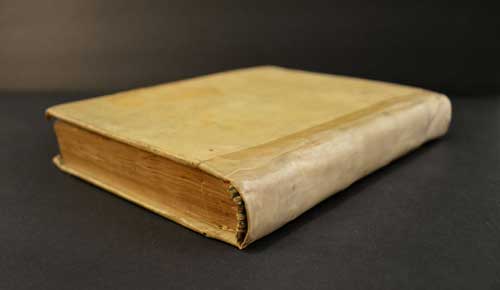 What’s the definition of “vellum”?

Vellum is essentially a fine skin binding, very popular in centuries past for its durable uses as a book binding material and a means of providing a writing surface for important documents.

Early on, vellum was used as a substitute for papyrus, which was in short supply at the time. The use of vellum for writing and binding reached its zenith during medieval times and is perhaps most recognizable for its use in illustrated manuscripts or illuminated Gregorian chants dating to the 15th and 16th centuries.

The word “vellum” is derived from the Latin “vitulinum” meaning “made from calf”, leading to Old French “vélin” (“calfskin”).

What was vellum originally made from?

Best defined, vellum refers to a parchment made from calf skin, as opposed to that from other animals, though some were made from sheepskin or goatskin. It was prepared for writing or printing on, to produce bindings for books, pages, or scrolls.

How vellum is made

To create vellum, the skin from the young calf must first be soaked in a lime wash. The lime causes hair follicles to expand, making it easier to scrape fat and the animal’s fur from the skin. This scraping is done with a curved knife called a “scudder”.

The soaked and scraped calfskin is then washed and stretched onto a wooden frame, and scraped again with a different type of knife to create a more even thickness. Finally the skin is left out to dry.

This material is known to be very hard to work with. When it is new, it is smooth and waxy to the touch, and although it is thin it also tends to be quite stiff and doesn’t bend very easily.

Can you imagine the difficulties early bookbinders had when using a stubborn material like vellum?

Popular in antiquity and a continuing UK tradition

Vellum became dominant as a book binding material in the 4th century and was also used for official documents such as indentures. The British government has used vellum for its official legal documents housed in Parliament for centuries and has (thankfully) continued this tradition into the 21st century.

In 2016, due to the high cost of using vellum for printing its laws, the House of Lords debated putting an to end this custom, but thankfully the Cabinet Office sourced money from its own coffers to continue to pay for this tradition.

Vellum is more seldom used today for ordinary book binding due to its expense, but is still occasionally used for limited and special editions of various classic works, and for certain important documents. 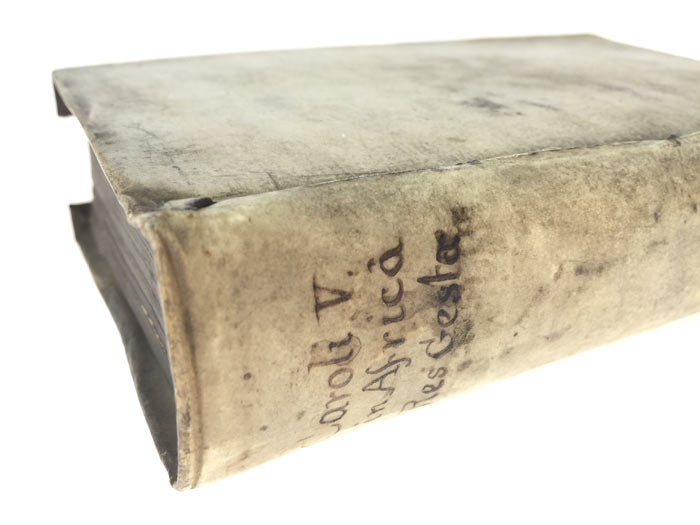 An example of vellum binding on a 1554 book

How to tell the difference between leather and vellum

Many people often confuse a leather binding with a vellum binding when examining antique books.

To make things more confusing, all vellum is considered parchment, but not all parchment is actually vellum. Parchment also comes from animal skin, heavily worked with and treated to remove hair and fat and to create a paper-like finished product suitable for printing.

While leather is animal skin, the skin has been chemically treated to protect it from rot.

Tanning the skin produces lots of variations in leather, and as such it can be tinted or colored in the familiar hues we’ve all seen. A gorgeous leather cover in a bold color is stereotypically one of the first things that comes to mind when someone says “antique book.”

Vellum, on the other hand, is somewhat easier to spot as it always retains its original milky white coloring (often with gray undertones) and is never tinted or colored as leather can be.

Vellum of considerable age, however, can sometimes deepen in color and take on a yellowish or light tan hue, as seen in the image of a 15th century vellum binding in this blog.