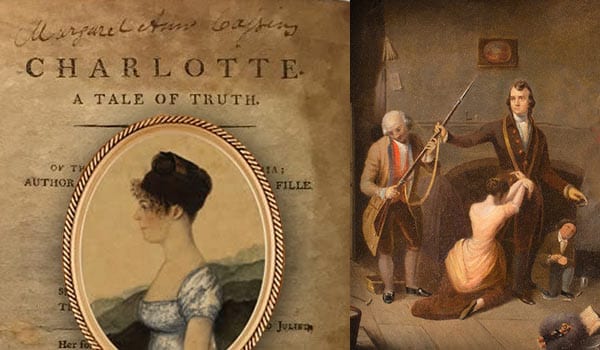 Read between the lines to discover feminism in its infancy

Once upon a time, a character named Charlotte Temple was wildly embraced by newly independent early American readers, hungry for romance and excitement after the trauma of recent American Revolution.

These days, it’s difficult to find anyone who even remembers Charlotte, or the woman who brought her to life – British-American author Susanna Rowson.

Yet, Rowson’s story of seduction and betrayal became the first best-selling novel in the new United States, and eventually the biggest seller in American history until Harriet Beecher Stowe’s classic “Uncle Tom’s Cabin” hit the book stalls in 1852, some fifty-eight years later.

“Charlotte, a Tale of Truth”

First published in England in 1791, “Charlotte, a Tale of Truth” is set against the background of the American Revolution. Susanna Rowson’s tragic story concerns the character of Charlotte Temple, an innocent English girl who elopes to America with a British soldier who promises to marry her, is eventually forsaken by him, suffers both physical and mental anguish, and dies after bearing his child.

Rowson was significant in early America’s literary history in that she was one of the first authors to use the Revolution as the background for a novel; in fact, some characters in “Charlotte” are British soldiers enroute to America to battle against the rebels.

From the book’s first publication in the United States in 1794, “Charlotte” received significant attention. Many readers were so enamored by the character and her story that they refused to view the book as fiction. Thousands of fans made pilgrimages to visit a gravestone in New York’s Trinity Churchyard that was rumored to be Charlotte Temple’s burial place.

In her lifetime, literary critics dismissively proclaimed that Susanna Rowson’s work was only read in “unsophisticated circles,” and that her readers were simple “housemaids and shopgirls,” yet despite these criticisms, the fact remained that “Charlotte” was read by more than half a million readers during the century and a half after its publication. 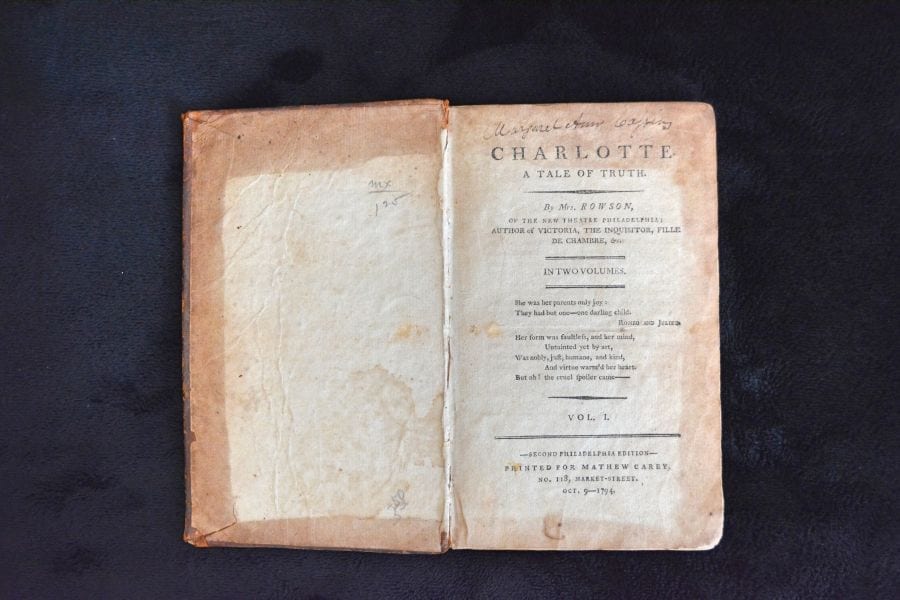 The American Edition of “Charlotte”

In the early 1790s, precious few Philadelphia readers could have been able to purchase or borrow any of Susanna Rowson’s English novels, in fact, the majority would never have even heard of her. Imported copies of “Charlotte” were extremely scarce.

Clever and industrious, Susanna Rowson had made a name for herself on the stage, and due to her newfound popularity, personally offered printer/publisher Mathew Carey a copy of “Charlotte”, suggesting that he issue an American edition to her adoring Philadelphia public.

Carey took the bait, and the first American edition of “Charlotte” is believed to have debuted in April, 1794. The book’s initial publication hinged completely on Rowson’s fame and popularity as an actress on the Philadelphia stage.

Some six months later, a Second Philadelphia Edition was produced by Mathew Carey, who placed a November, 1794 advertisement in the Philadelphia Gazette stating that “the rapid sale of the first edition of this interesting novel, in a few months, is the best proof of its merit.”

And what of the authoress? Described by her biographer as “a lady of many adventures,” Susanna Rowson (1762-1824) was well noted as a novelist, poet, textbook author, playwright, actress and a pioneer in women’s education.

Though born in England, Rowson identified herself in her writings as an American and promoted distinctly American values; her works reveal a concern with freedom and democratic ideals, both politically and sexually. In 18th century America, Rowson’s message – if read between the lines – is a feminist warning to young women.

Sadly, despite the enormous popularity Rowson enjoyed in her heydey, especially as a stage actress, her importance as the first best-selling American author was largely forgotten by the mid-twentieth century.

If you’re interested in learning the value of an early American book, contact us for a free auction estimate.

We buy, auction and consign books related to the Revolutionary War and early America, including antique books on the history of America, antique United States maps, ephemera, and indentures.