What is the “Stranger Things” Grandfather Clock? 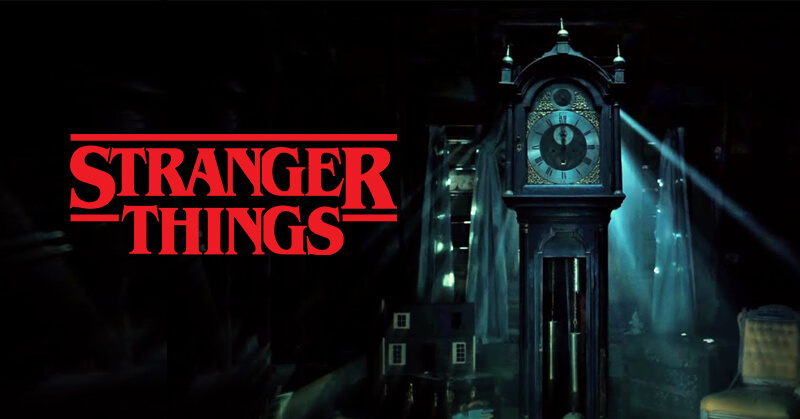 The ominous, echoing toll of an antique grandfather clock is the theme of the newest installment of Netflix’s megahit sci-fi series “Stranger Things”.

The grandfather clock was first seen in the trailer and cryptic countdown to the release of “Stranger Things” season 4, and now that the episodes have been released, the full meaning behind the sinister clock has been revealed.

The stately timepiece is a creepy clue to the identity of “Stranger Things”’ newest bone-snapping, eye-popping, Freddy Kreuger-esque villain. Intended victims are cursed with a foreboding vision of this clock appearing in some eerily impossible place – embedded in block walls and trees, as if stuck halfway between worlds. Once they’ve seen it, we know that their time is almost at an end.

A few variations of the grandfather clock were used in the filming of “Stranger Things” – a dusty, silent version in the haunted Creel house, a clock mysteriously built into the top of a coffin, and several underworld versions encrusted in tentacles.

So, exactly what kind of clock is the “Stranger Things” clock?

The business end of the spooky longcase clock is its ornate face – an eight-day movement (a clock which only needs to be wound once per week using a key), which strikes on the hour. The additional dials seen on the clock face display seconds and the date.

The face of the prop grandfather clock is actually a design from the mid-18th century, created by (non-accursed) London clockmaker Thomas Grignion.

If you’re lucky enough to see this Grignion clock at auction rather than in an interdimensional nightmare vision, it can fetch upwards of $5,000, sometimes into the $20,000 range depending upon the beauty and intricacies of the cabinet.

The “Stranger Things” clock has a dark wooden body in a Gothic style that was popular during the 1700s, though makers have continued to produce this style well into the 20th century. Gothic style has traditionally been connected with mystery and horror books and films, so this particular choice is fitting.

Sitting atop the pediment (top of the clock) are three brass finials. The glass-covered lower door reveals the weights and pendulum inside, allowing viewers to see deadly time in motion.

Why is it called a grandfather clock?

The name “grandfather clock” dates to the relatively recent period of the late 19th century, and was coined (surprisingly) by a songwriter. 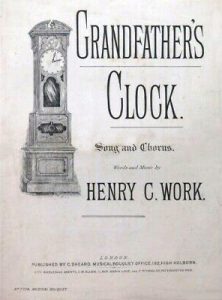 The story goes that Henry Clay Work, a songwriter whose popularity eclipsed even that of Stephen Foster during the Civil War, traveled to England in 1875. While there, he lodged in an old hotel in whose lobby stood a dusty, broken longcase clock.

The following year, Work composed a song based upon this somewhat eerie tale, titled “My Grandfather’s Clock”:

It was bought on the morn on the day that he was born
It was always his treasure and pride
But it stopped, short, never to go again
When the old man died

Ninety years without slumbering
Tic toc tic toc
His life’s seconds numbering
Tic toc tic toc
It stopped, short, never to go again
When the old man died.
In watching its pendulum swing to and fro
Many hours he had spent when a boy
And through childhood and manhood, the clock seemed to know
And to share both his grief and his joy

For it struck 24 when he entered at the door
With a blooming and beautiful bride,
But it stopped, short, never to go again
When the old man died

The song became a hit, selling over a million copies of sheet music. Inadvertently, the popular tune became forevermore associated with longcase clocks.

Whether you believe clocks have the ability to stop time itself or indicate the hour of a chilling demise is up to you.