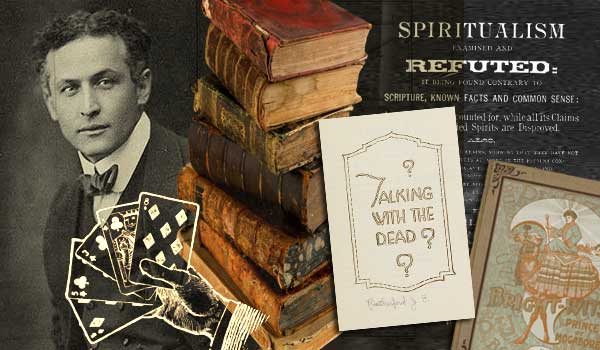 The most legendary magician and escape artist of all time, whose mysterious illusions and escapes made him a household name still revered today, died on Halloween in 1926.

Though his feats and escapes were known the world over in his day, in later years Harry Houdini devoted himself to the world of mediums and spiritualists – first in an effort to find out if there was truth to the dark art, and later, to debunk and expose fraudulent scammers.

In addition to his psychic research and theatrical performances, Houdini spent a lifetime collecting rare and unusual books on his most obsessive topics.

“The love of bibliographic research has been the cornerstone of my life from my earliest years,” Houdini once told the Club of Odd Volumes,

Throughout his career, Harry Houdini amassed a jaw-dropping collection of antique books on magic, spiritualism and other mystical topics.

Though the real meat of his library are a vast number of works on spiritualism dating from the 19th and 20th centuries, the collection also includes a variety of magic-related books inscribed by well-known magicians.

“[I’ve] accumulated one of the largest libraries in the world on psychic phenomena, spiritualism, magic, witchcraft, demonology, evil spirits, etc.,” Houdini himself wrote in 1924, “[With] some of the material going back as far as 1489.” (A Magician Among the Spirits)

While on tour all over the world, Houdini spent every moment of available free time deep in library study, interviewing retired magicians and collectors, and hunting in antique book shops, even going so far as to place want-ads seeking various magic materials of interest.

On occasion, Houdini managed to purchase collections once owned by his rivals. He bought portions of magic books from the Davenport Brothers’ collection, and the libraries of Hagan, Adrian Platt, Stead, Elliott Robinson, Edwin Fay Rice, Harrington, Young, Alexander, Heinberger and G.W. Hunter.

Death strikes on the afternoon of Halloween

Just days after what would be his final stage performance, the strong and seemingly healthy Houdini was suddenly dead at age 52.

His shocking death resulted not from a death-defying magic stunt, but from peritonitis. The great magician’s appendix had ruptured following a stomach-punch from a fan who challenged him to take the hit.

Following Houdini’s untimely death, his grieving widow Bess continued to conduct séances in repeated attempts to channel the spirit of her dead husband on the eve of Halloween each year until she, too, went to the grave.

Though the annual séance tradition continues to this day, Houdini has failed to make contact.

Collection donated to Library of Congress in 1927

In May, 1927, sixteen large packing cases arrived at the doorstep of the United States Library of Congress. Inside, library curators discovered Harry Houdini’s exhaustive book library in excess of 5,000 volumes, a generous donation bequeathed by Houdini himself.