How to Identify a First Edition Book – It’s Not So Easy! Why are first edition books valuable?

Often, determining the value of antique books or modern collectible books requires knowing whether the book is a first edition.

A first edition is considered to be more desirable than later editions because the firsts are usually rarer. Many first edition printings were published in smaller quantities than subsequent printings, making the firsts more difficult to find.

Figuring this out is often easier said than done! There’s no single way to instantly determine which edition of a book you have, but there are lots of clues that can help lead you in the right direction.

What’s the difference between a first edition and a first printing?

When a book is sold for the first time, that’s called the “first edition.” It’s the initial printing of a book (after the book proof/advance copy).

Technically the phrase “First Edition” consists of the first printing plus any additional printings of the same first edition.

First editions will generally hold the most value if they are first editions, first printings.

When there is enough new information or edits to warrant updating the book, a revised second edition may be published. This is often the case with non-fiction books such as text-books.

A 1st/1st is what serious collectors are looking for. A popular book may have had dozens of additional printings causing its first printing to be the most valuable.

For example, Harry Potter books are phenomenally popular and each have been reprinted dozens of times to meet demand. The first printing of each Harry Potter novel is the most sought after and valuable.

To conclusively determine whether your book is a first edition, it’s wise to get in touch with an expert who will be able to put together the various pieces of information unique to the individual book and come up with an answer.

How to tell if a book is a first edition

In some older books, the publisher may have left a helpful clue in that they’ll actually state the words “first edition” or “first printing” on the book’s copyright page.

Books can be printed in one country first and then in another country, or vice versa. The printing that came first would be considered the “true first edition” and tends to hold more value as it was the very first publishing of the book – ever.

This is why enlisting the help of a rare book dealer or auctioneer is really the best way to determine the edition of an antique book. 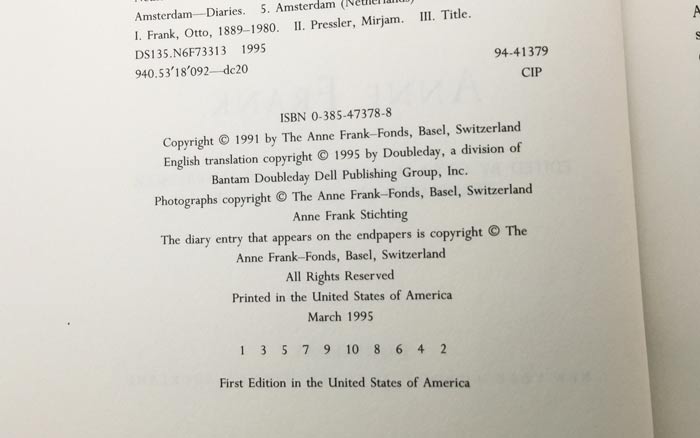 A typical number line, plus the printed words “First Edition”. The numbers relate to the printing run also known as “impressions”. Note the numbers in the run include all numbers from 1 to 10. The number “1” indicates that this is a First Edition and a First Printing.

Grab any book on your shelf and flip to the copyright page (it’s one of the very first pages in the book) to get a look at a typical number line or print run.

Many (but not all) publishers use the words “first edition” to identify the initial publication of a book.

Keep in mind though, that some books are issued in both hardback and paperback editions, and each could be labeled as a “first edition” on the copyright page, but only the one truly printed first would be considered a “true first”.

Check the number line or print run
The number line refers to the line of numbers printed on the copyright page. These lines of numbers usually follow a format such as (1 2 3 4 5 6 7 8 9 10 ) where the “1” signifies that the book is a first edition.

Does the book have any special call-outs?
Special call-outs on a modern book might be stickers, or blurbs on dust jackets that mention things like “Best Selling” or “Award Winning” or “Book Club Edition”.

This indicates that the book has been out long enough to have won awards or gained notoriety, and publishers re-issued the book in a later edition highlighting these accolades to sell more copies. 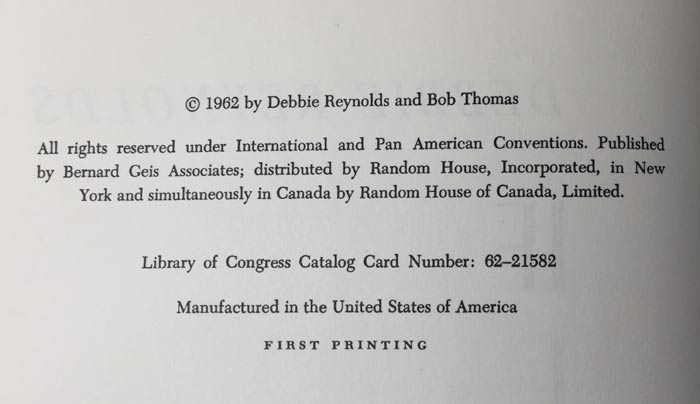 The printed words “First Printing” were (very helpfully!) added by the publisher here, which helps to show this is a First Edition, First Printing.

Let’s not forget the dust jacket. Dust jackets are incredibly important in valuing modern first editions, if the book was originally issued with a dust jacket, that is.

First state dust jackets and errors within the text also are major indicators of the editions. In the early stages of publication, books often contain printing imperfections and errors that have slipped by before being noticed and corrected prior to printing.

Such clues are often very helpful in identifying an early printing, and in some cases, a first state dust jacket is what can reveal the answer.

If there’s no printing year, does that mean it’s a first edition?

One rule that doesn’t hold true that is often heard from many (even competent book sellers) is – “If there’s no printing year within the book then it’s a First Edition.”

There are always exceptions to the rule, but in most cases a book without a printing year shows it to in fact be a later edition. Later printings can drastically decrease the value of antique books.

Let’s take – for instance – the first edition of “Harry Potter”.

The first run – meaning the first printing – of “Harry Potter and the Philosopher’s Stone” (1997) only had a printing run of 500 books. A total of 250 of those books were immediately distributed to libraries. As we all know, J.K. Rowling’s series became an instant classic and is one of the most collectible of modern first edition books.

Determining whether a book is a first edition can be problematic and confusing for amateur book sleuths. Feel free to contact us if you need help in your quest.

If you’re interested in learning more details about the subject, here are some helpful resources: