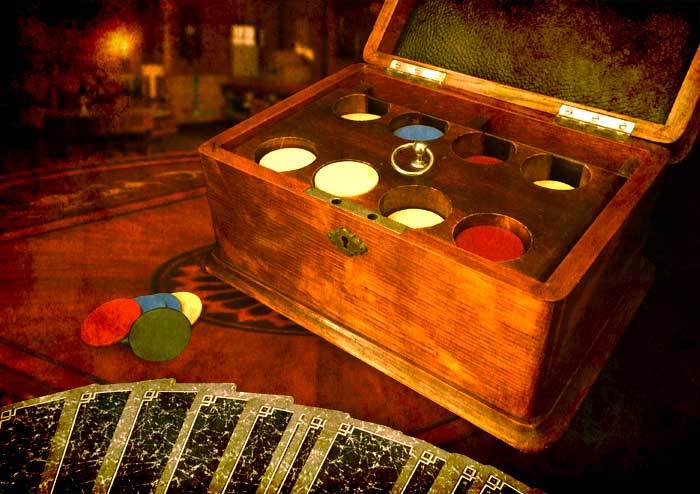 Gambling has been part of America’s history from the nation’s infancy, going all the way back to colonial times. Even before the first European settlers arrived in North America, native tribes had developed games of chance.

For the most part until the 1680s, gambling in America had very few restrictions. The Quakers were one of the first to introduce laws that minimized the proliferation of some games and banned others completely. By the 1780s, gambling had seen a massive boom in popularity.

(1788) “Hoyle’s Rules of Games”, a great source for information regarding early games and style

As the young United States and its cities grew, so did the prevalence of card and gaming tables. In Louisiana, free Blacks joined slaves and whites at taverns and gambling tables, playing such illegal card games as “Twenty-One” and Canasta along with Craps, a game that was popularized by free and enslaved Africans in Mississippi and Alabama.

(1866) Dick & Fitzgerald’s “The American Card-Player: A Lone Hand”, the first book to publish rules of poker

It wasn’t until 1827 that New Orleans became home to America’s first casino where frontiersmen regularly played a new game called “Poker”. Perhaps the world’s best-known card game, Poker was born in America and was a derivative of “Poque”, a forerunner of the game.

New Orleans became a hotspot for gamblers, card cheats, sharps, and hustlers and hit its peak in the 1840s. With the influx of gambling, there were also many serious social questions regarding what was considered the terrible sinful nature of gambling. These views were published in antique gambling books of the time.

(1847) “An Exposure of the Arts and Miseries of Gambling”

“The Expert at the Card Table” Debuts

During the next 30 to 40 years, card cheating became commonplace and in 1902, a book entitled “The Expert at the Card Table” was published by S.W. Erdnase, a pseudonym used by the author. This classic book has become highly respected (mostly among magicians by whom it is often referred to as “The Bible”.)

The Identity of S.W. Erdnase is still under much deliberation and this topic alone deserves an in-depth discussion. It is a good bet to surmise that Erdnase was not, in fact, a gambler but was most likely a magician. It is evident that many of his famous moves would not fly at a real-life card table, even in private games.

SW Erdnase’s “The Expert at the Card Table”

During the mid 20th century, many authors devised complex strategies to give them the advantage and favored odds at the card table. Many books were written and some of the most famous authors include John Scarne, Edward Thorp, and Judson Cameron to name a few.

With the modern age of gambling and the upsurge of cheating, casinos had to keep evolving their protection strategies. Hustlers and card cheats were forever attempting to outwit the casino with new moves and clever devices.

One of the most prominent and highly-regarded experts in this field is Steve Forte. Forte’s contribution and knowledge of gambling history, protection strategies, hustlers, card cheats, and devices are unsurpassed today.

We have a particular focus on magic and gambling books and ephemera. If you are interested in selling your collection or library with us at auction we offer a premium auction consignment service just for you.

We also have weekly magic auctions on eBay. Check back regularly to see what new and interesting books we have!

I’d love to hear from you (contact me) whether to discuss this the history of gambling with fellow enthusiasts or if you are interested in expanding or liquidating your own antique gambling book collection or gambling devices, I’m here to help!

Join our mailing list to receive periodic updates about our upcoming online auctions for rare, antique and OOP magic books, ephemera and collectibles.

Thanks for your interest in our magic auctions!