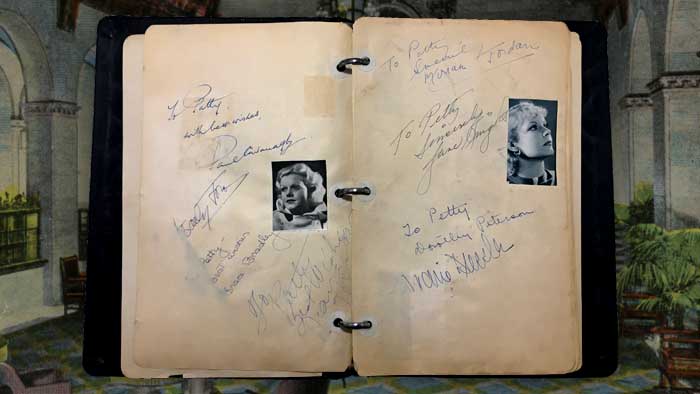 If the pages of this vintage autograph book could talk, they might describe what they witnessed over 80 years ago in Hollywood.

Imagine stepping back in time to a glittering evening at the elegant Biltmore Hotel in downtown Los Angeles during prohibition and then tagging along for a drive up the California coast to William Randolph Heart’s legendary San Simeon castle.

Rub elbows with a bevvy of movie stars, partying the night away at the Biltmore Bowl, the hotel’s banquet room which plays host to some of the very first Academy Awards ceremonies in tinseltown. The night is a literal who’s-who of Hollywood’s golden age teeming with the likes of Jean Harlow, Cary Grant, Clark Gable and Carole Lombard.

It was in this atmosphere in the 1930’s that this little autograph book was compiled, page by page; held by laughing starlets trying not to spill champagne, and scribbled in by handsome leading men in tuxedos.

Though classic film lovers today will never have an opportunity to meet these silver screen luminaries, through the traces of ink left behind on a little black book many years ago, we may perhaps feel a connection.

This absolutely incredible autograph book is the finest we’ve ever seen – the ultimate treasure for classic Hollywood collectors.

Packed with over 240 signatures of some of early cinema’s glamorous elite, the autographs were obtained in person at Los Angeles’ famed Biltmore Hotel, as well as at parties and dinners given at Hearst Castle in its 1930’s heyday.

Specifically, a majority of signatures were collected during the gaiety of the hotel’s New Year’s Eve party of December 31, 1933; others were given at Oscar parties in the hotel’s Biltmore Bowl during 1930’s Academy Awards banquets. Still others were written by actors and actresses relaxing for a weekend of horseback riding, tennis and cocktails at Hearst Castle in the mid 1930’s. Hearst’s celebrity costume parties and extravagant dinners thrown for the brightest stars in Hollywood are the stuff of legend.

This autograph album is from the estate of James Stell Petty, a Los Angeles hotel manager who rubbed elbows with his famous clientele in the 1930’s. Secreted away for the last several decades, Petty’s family decided to rehome this treasure to a collector who can appreciate its magnitude to Hollywood history. We’re proud to represent such a prestigious piece of movie memorabilia!

As a young man, Petty journeyed to Los Angeles to seek an exciting life for himself and find opportunity in the midst of the Great Depression. In the early 1930’s, Petty landed a job working for Baron Long (1883-1962) at the elegant Los Angeles Biltmore Hotel, eventually working his way up to a managerial position which offered certain perks.

The Biltmore was considered a “statement to the rest of the world that Los Angeles had arrived as an American metropolis,” and despite prohibition, the hotel still managed to throw lavish parties in The Gold Room and in the Biltmore Bowl which played host to the 1931 and 1935 Academy Awards. The place was considered “the” place for Hollywood stars to party.

Petty was one of Baron Long’s favorite employees and as such gained special access to the hotel’s celebrity clientele once he became a manager. He collected many autographs at various hotel galas and affairs during this time and in later years told the stories of meeting famous people – including some real-life gangsters – in the hallways behind the public areas when they would slip out of the hotel’s speakeasy by way of secret exits to avoid the police and paparazzi.

During Petty’s tenure at the Biltmore he came to know newspaper magnate William Randolph Hearst and was invited to work at Hearst Castle. Petty reported that there were many wild parties thrown at the Castle, and he’d witnessed quite a few “affectionate” young starlets carousing with male guests at San Simeon. He picked up additional movie autographs featured in this book while working at San Simeon.

A standout entry in the book is a circa 1933 genuine in-person Jean Harlow signature – a rarity among movie autographs as Harlow died young, at the age of 26, and her mother (known among collectors as ‘Mama Jean’) typically handled most of the correspondence and signing duties for her famous daughter.

A sampling of the other major stars whose signatures fill the pages of this book include: