Works of Shakespeare with Double Fore-Edge Paintings (Sold for $1,800) 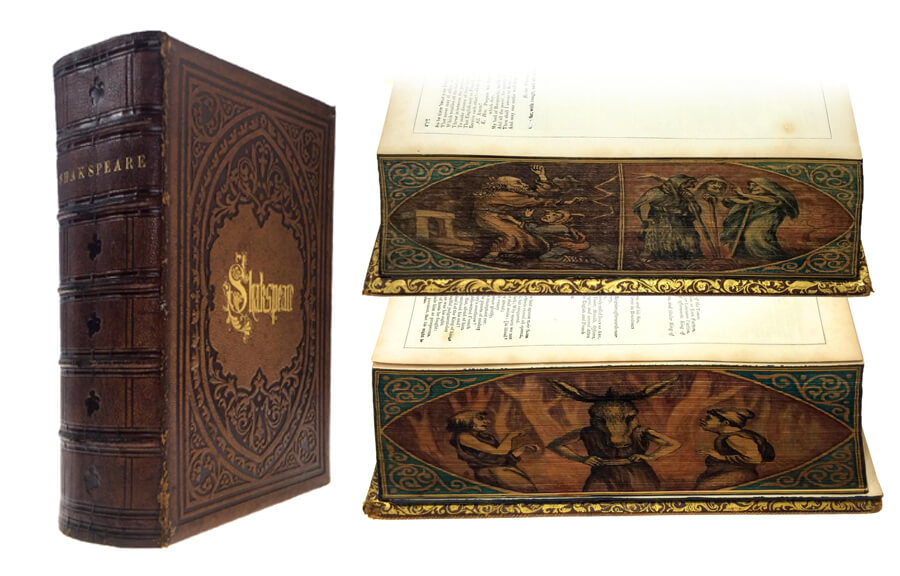 This copy of William Shakespeare’s works sold auction for $1,800 in January, 2021

“Shakespear Comprising his Dramatic and Poetical Works, Complete: Accurately Printed from the Text of the Corrected Copy Left by the Late George Stevens with a Glossary & Notes”, complete in one volume, c1870.

The fore edge showcases wonderfully executed fine paintings of legendary Shakespearean scenes. One piece shows the three witches from “Macbeth”, another, the ass-headed character “Bottom” from “A Midsummer Night’s Dream”, and a depiction of what appears to be the graveyard scene from “Hamlet”.

There is an interesting legend of how hidden fore-edge painting on books supposedly first began:

Charles II of England had a lady friend, a duchess, who often borrowed his books, sometimes forgetting to return them. As the story goes, the king commissioned the court painter, Sir Peter Lely, and the court bookbinder, Samuel Mearne, to devise a secret method to identify his books. They worked out a unique plan to paint a hidden image in the edges.

Some weeks later, when the king visited the duchess, he spotted a familiar-looking book on a shelf.

Taking it down, he said, “I’ll just take my book along with me.” “But sire,” the lady protested, “that book is mine.”

“Oh?” The king raised his brows. Then, with a sly smile, he fanned out the book and revealed what had been painted on the inner edges – the royal coat of arms.