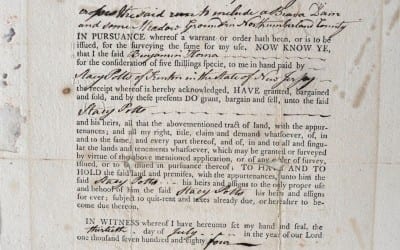 The Native American name Chingachmouche, mentioned in the location details of the land deed, means “great moose or elk”, and was applied the name to a stream on the opposite side of the east coast’s Susquehanna River. Today, this stream is known as Moose Creek.

Know all men by their presents, that whereas application hath lately been made by me: Benjamin Horner of the City of Philadelphia Merchant – to the Land office of the State of Pennsylvania, for a grant of a tract of land, situate on Alder Run about half a mile above where the Indian Path between the Bald Eagle & Chingachmouche [ ] the said [ ] to include a Beaver Dam and some Meadow Ground in Northumberland County.

In pursuance whereof a warrant or order hath been, or is to be issued, for the surveying the same for my use. Now know ye, that I the said Benjamin Hornor for the consideration of five shillings specie, to me in hand paid by Stacy Potts of Trenton in the State of New Jersey – the receipt whereof is hereby acknowledged, have granted, bargained, and sold, and by these presents do grant, bargain and sell, unto the said Stacy Potts – and his heirs, all that the abovementioned tract of land, with the appurtenances; and all my right, title, claim and demand whatsoever, of, in and to the same, and every part thereof, and of, in and to all and singular the lands and tenements whatsoever, which may be granted or surveyed by virtue of the above mentioned application, or of any order of survey, issued, or to be issued in pursuance thereof; to have and to hold the said land and premesis, with the appurtenances, unto him the said Stacy Potts – his heirs and assigns to the only proper use and behoof of him the said Stacy Potts his heirs and assigns for ever; subject to quit-rent and taxes already due, or hereafter to become due thereon.

In witness whereof I have hereunto set my hand and seal, the thirteenth day of July in the year of our Lord one thousand seven hundred and eighty four.

Sealed and delivered in the Presence of Sarah Hornor, Henry Cliffton, Berry Hornor