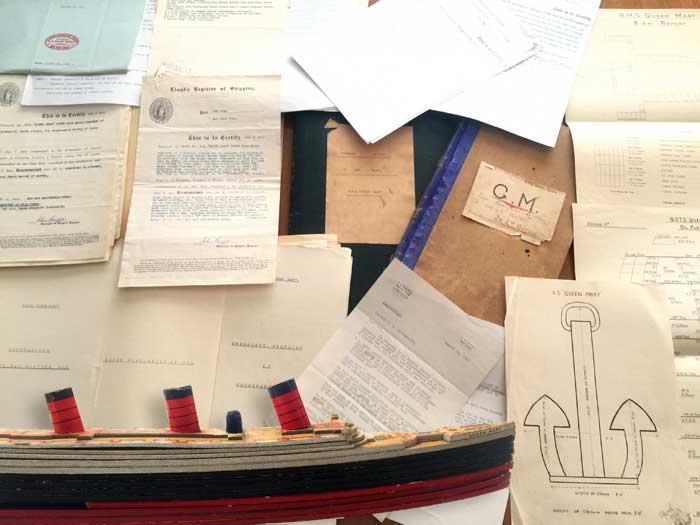 These rare ocean liner documents sold at auction for $1,200 in February, 2020

“The Grey Ghost” at War: Ship’s Records at Auction

​​​​​​​Now at auction, a treasure trove of data on the ship’s condition and troop movements during WWII includes Cunard White Star letters to the ship’s captains, including Captain J.G.P. Bisset, doubly famous for his role in the rescue of RMS Titanic’s survivors aboard the Carpathia.

Another notable Cunard Captain represented in the collection is Cyril Illingworth, the commander in charge when the “Grey Ghost” tragically sliced the cruiser HMS Curacoa in half on the Atlantic and was forced to proceed without stopping due to the German U-Boats on the hunt for her at sea.

A few auction highlights include:

How to Deal with a Torpedo Hit at Sea

Several official documents represented include signed letters containing data on the potential effects of a German torpedo hit to the RMS Queen Mary or her sister ship, Queen Elizabeth.

Cunard’s letter to the Captain illustrates various scenarios in which the two Atlantic Queens may be damaged or sunk by enemy torpedoes, saying: “In view of the emphasis put on the importance of the Senior Officers of the ship being conversant with these questions, it has been arranged that a meeting be held on board your ship for that purpose.”

RMS Queen Mary, known during the war as “The Gray Ghost” was an incredibly important part of the Allied victory in Europe, regularly ferrying 15,000+ service men to theatres of war and successfully dodging Nazi Germany’s U-Boats lurking in the icy waters of the Atlantic.

The RMS Queen Mary survived being hunted at sea despite Adolf Hitler’s offer of $250,000 and the Iron Cross to any U-boat captain that could fire the torpedo that would sink the great ocean liner.

These RMS Queen Mary materials are consigned from the private collection of John C. Wells (1909-2000) who had close business ties with the City of Long Beach during the 1960s – 1970s and collected exclusive pieces of ephemera from the ship during her early days of conversion to a museum / hotel.