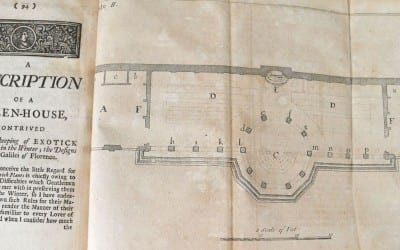 Penned by Richard Bradley FRS (1688 – 1732), a noted English botanist. After a 1714 trip to the Netherlands, Bradley became fascinated in horticulture, spending the following years writing and publishing important works on horticulture and related subjects such as natural history. He became the first professor of botany at the University of Cambridge in 1724 and held the title for the rest of his life as he continued his work in England studying and publishing books on these related naturalistic topics to generate an income.

During this time, Bradley published his “New Improvements of Planting and Gardening; Philosophical and Practical in Three Parts”.  The book includes directions on the layout and design of gardens with the use of a simple kaleidoscope, a landscaping technique still seen in lush gardens around the world today.

Shown here is a fourth edition of “New Improvements”, published in 1724 and featuring many gorgeous copper plates depicting various 18th century garden designs, a greenhouse shown in three large foldouts, and a “pattern for all England”, Herefordshire Orchards.

I. Containing, A New System of Vegetation. Explaining the motion of the sap, and Generation of Plants. Of soils, and the improvement of forest-trees. With a new invention, whereby more designs of the Garden Plats may be made in an hour, than can be found in all the books of gardening yet extant.

II. The best manner of improving flower gardens, or parterres; of raising and propagating all sorts of flowers, and of the adorning of gardens.