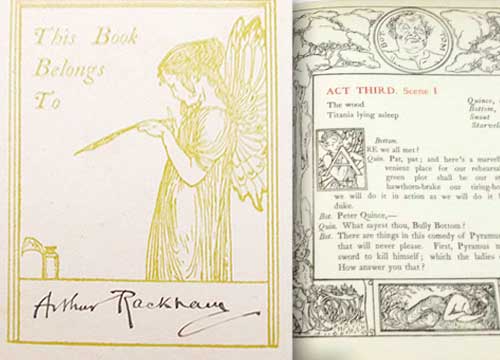 Bell, a talented English artist and designer, also created the mosaic in the tympanum at Westminster Cathedral in London.

What makes this book seriously interesting is that it was once one of famed English illustrator Arthur Rackham’s personal copies.

Regarded as one of the most popular illustrators from Britain’s ‘Golden Age’ of book illustration (considered to date from 1890 until the end of WWI), Rackham’s gorgeous artwork can be seen in dozens of iconic books including Aesop’s Fables, Gulliver’s Travels and Alice’s Adventures in Wonderland.

It makes you wonder … was this very copy of Shakespeare’s classic the inspiration for Rackham’s illustrations later in his career? His career began around the time this edition was published, and he would in fact go on to illustrate this same book in the 1908 edition of “Midsummer”.