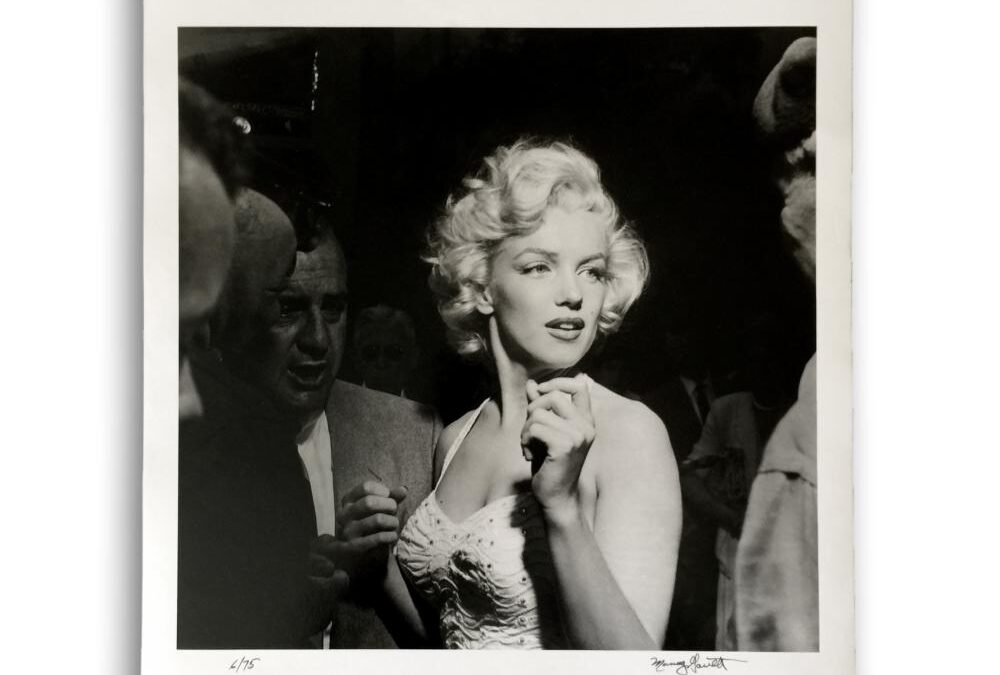 This collection of Marilyn Monroe photos sold at auction for $4,000 in August, 2020

We were proud to represent this collection, offered in conjunction with Marilyn Monroe’s 94th birthday. A collection of 19 exquisite oversize photographs of Marilyn printed by the original photographer, Murray Garrett.

Each piece varies slightly in size, up to a very frameable 17″ x 22″, and was produced exclusively as a Limited Edition print by Garrett, a legendary Hollywood photographer. Made directly from Garrett’s original negatives, these later-prints have been hand-signed by Garrett and many are also numbered.

Murray Garrett worked as a professional photographer specializing in show business, first in New York in the early 1940’s then in Hollywood from 1946 to 1973.

He was sent on assignment by the best news magazines, including Life, Time, and Look, and also worked privately for many directors, film executives, and stars on personal assignments.

A quick overview of the collection includes black-and-white pictures of Marilyn at several publicity events in Hollywood and New York, including: 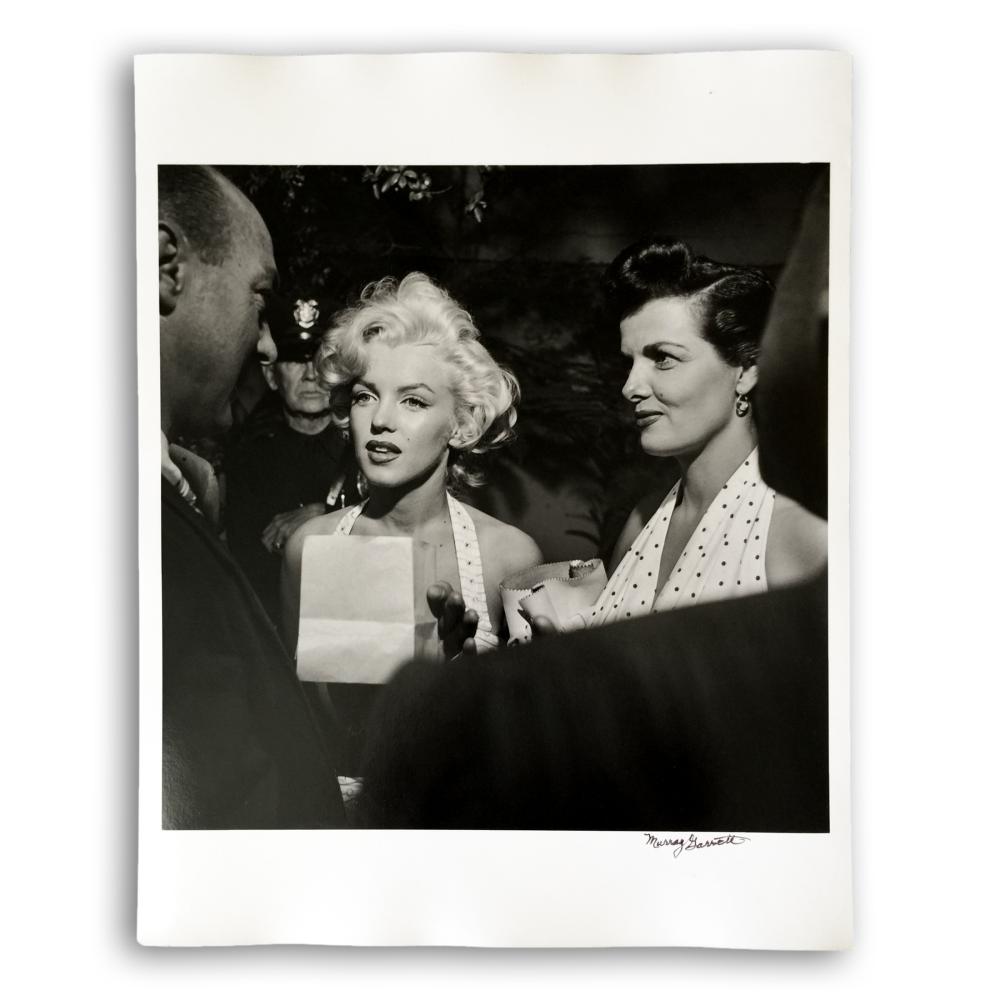 Marilyn Monroe is positively luminescent captured in this series of candid photos as she prepares to set her hands and feet in the wet cement in the forecourt of Grauman’s Chinese Theatre in Hollywood on June 26, 1953.

Marilyn and co-star Jane Russell left their handprints side by side at Grauman’s as they promoted their comedy classic, “Gentlemen Prefer Blondes” (20th Century-Fox, 1953).

Marilyn Monroe is pictured in this candid photo taken January 8, 1952 at the Henrietta Awards ceremony at Santa Monica’s Club Casa del Mar. On this night, MM took home her very first award for acting, “Best Young Personality of the Box Office in 1951”.

The 25 year old Monroe looks absolutely stunning wearing a shockingly plunging, scarlet red Oleg Cassini dress. She constantly readjusted the strapless dress throughout the evening so much so that the press took notice. A female journalist present at the party went so far as to write that Miss Monroe looked “cheap and vulgar” in this dress, commenting that wearing a sack of potatoes would have looked more elegant.

Marilyn took up that challenge soon afterwards and perfectly modeled that sack of potatoes in a famous photo shoot. 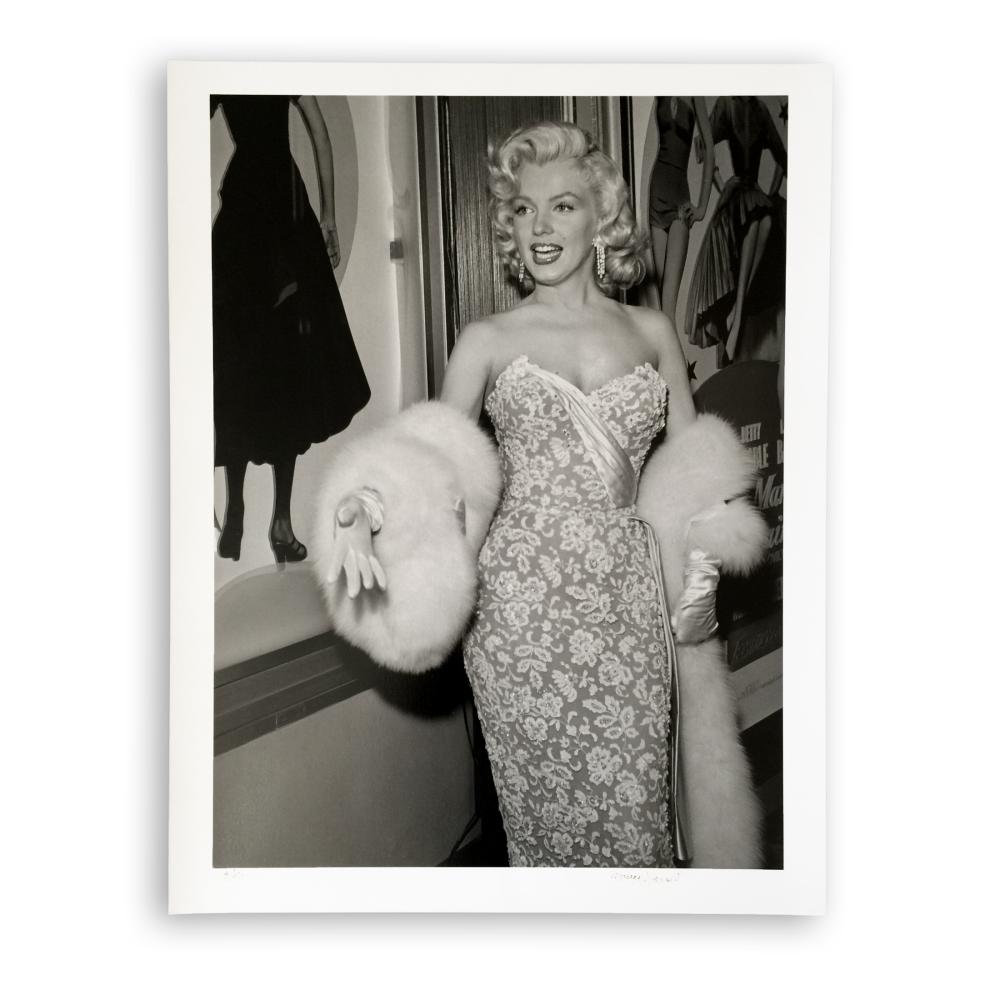 Marilyn Monroe poses for the press in a series of candid photos snapped on November 4, 1953 during the premiere of her comedy classic, “How to Marry A Millionaire” (20th Century-Fox, 1953). Marilyn stands in front of a large poster for the movie, looking gorgeous in a champagne colored gown and satin gloves. She wore this same outfit on her famous appearance on the Jack Benny Show.

Marilyn is also pictured with co-star Lauren Bacall as they enter the theatre.

This series of candid photos captures Marilyn as she’s flanked by two other famous faces at the Out of This World Series charity baseball game. Marilyn wore a skin-tight pink sleeveless dress at this nighttime celebrity ballgame and is pictured with Dale Robertson and Mickey Rooney who mugs for the camera while grabbing the jersey of Mexican welterweight boxer Art “Golden Boy” Aragon in a mock fight over the pretty girl.

The baseball game was hosted at Los Angeles’ Gilmore Field Stadium on September 15, 1952. The stadium was demolished later that same year to make way for CBS Television City.