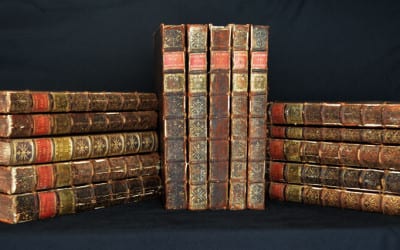 This stunning complete first edition set of De Montfaucon’s monumental works on world history contains 15 handsome volumes. The set was once in the library of Britain’s Sir John Henry Thorold, 12th Baronet at Syston Park. A Benedictine passionate about the historical studies of archaeology and Greek paleography, De Montfaucon’s Antiquité featured here covered in grand illustrated detail across fifteen volumes the social and artistic aspects of ancient civilizations such as Egypt. These sets are well respected and are considered the “foundation stones of scientific archaeology a cornerstone of archaeological knowledge.”

These large folios are fully complete with 1,394 copper engravings plus portrait, thus consisting of a staggering 1,145 single page, 247 double page and 3 triple fold fine copper engravings. This 1719 first edition is well known to be far superior to the second edition that was published in 1722. The copper engravings are of the highest quality in this magnificent and rare set of Montfaucon’s landmark work on classical archaeology. First published in 1719, 1,800 sets were published and were sold out in just two months.

This wonderful set belonged to Sir John Henry Thorold, 12th Baronet (9 March 1842 – October 1922), a British Conservative Party politician. He inherited Syston Park and with it, the stunning library chock full of rare antiquarian books and manuscripts – a Gutenberg Bible among them. The estate and glorious library eventually passed on to Thorold’s widow Mary Anne, who auctioned the books off in the years following.

The quality and condition of the engravings along with the extremely rare entirety makes this set highly desirable. Just one other complete set is for sale elsewhere priced at $30,000.