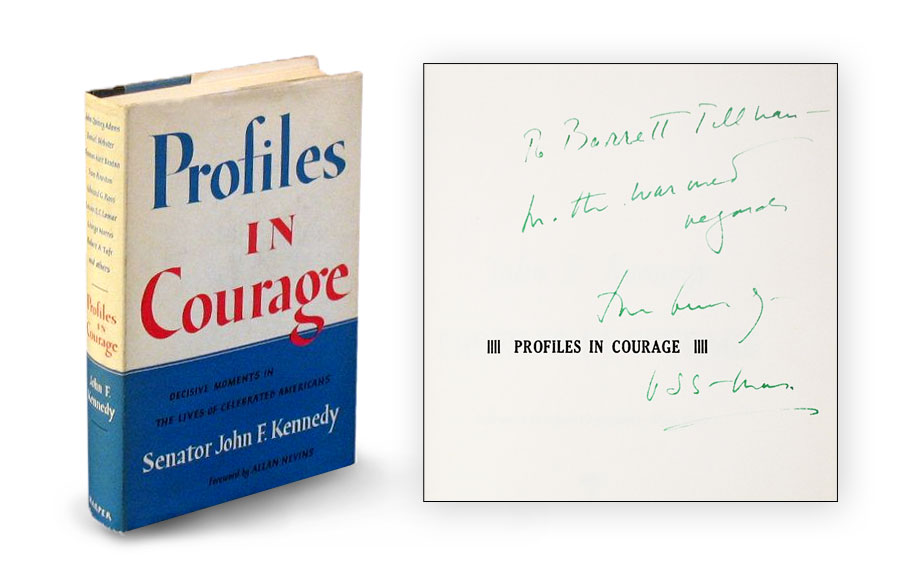 This signed book, a 1957 edition of John F. Kennedy’s American classic, “Profiles in Courage” was sold at auction in July, 2017 for $3,300 and remains one of our favorite rare book auctions.

The book was hand-signed by then-Senator Kennedy during his bid for the Presidency in 1959. JFK’s message was inscribed to a young Oregon boy, Barrett Tillman, who later went on to become a well published author on naval and aviation subjects.

JFK’s inscription is written on the title page in green ink, a habit typical to the Massachusetts Senator in the late 1950’s:

The free end paper also includes an inscription in ink from Tillman’s aunt (dated April 6, 1958), the person who obtained the in-person signature. 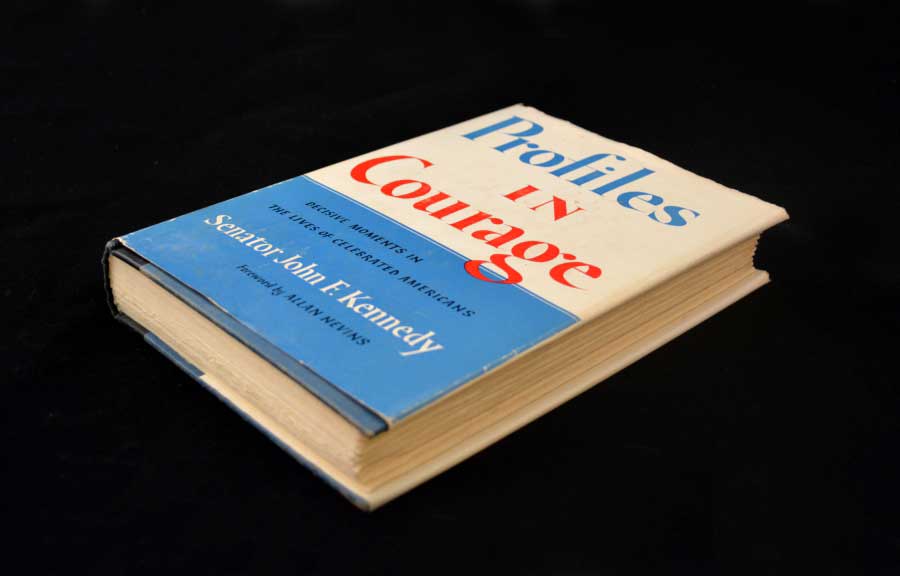 The Story Behind the Signed Book

​​​​​​​In November of 1959, Jack and Jackie Kennedy were in the midst of their hectic pre-campaign stops all over the United States in the young Democratic Senator’s bid for the 1960 Presidential election.

The Kennedys then visited the opening of Pendleton’s Lord’s Acre barbecue pit, and browsed a local antique market where Jackie bought an antique quilt.

Afterwards, Senator Kennedy was the featured speaker at a state Jaycee personal development program at the Bend High cafeteria. At some point during his public outreach events on this day, Mrs. Beverly Tillman asked Kennedy to sign her copy of “Profiles in Courage” for her young son, Barrett.

Nearly exactly one year later, the 1960 Presidential election was held on November 8, 1960 and Kennedy became the 35th President of the United States.

The signed book is accompanied by a hand-signed letter of provenance received directly from Mr. Tillman, detailing the history of the book within his family.

​​​​​​​Today a widely recognized authority on air warfare in World War II and the author of more than forty nonfiction and fiction books on military topics, Barrett Tillman has received six awards for history and literature, including the Admiral Arthur Radford Award.

About JFK’s “Profiles in Courage”

“Profiles in Courage” was written by John F. Kennedy while still in the U.S. Senate. JFK’s volume of brief biographies tells the stories of several United States Senators who exhibited great courage under tremendous pressure from their parties and constituents.

“Profiles in Courage” became a bestselling book three times (when JFK was a Senator in the late 1950s, after his Presidential election in 1960, and following his assassination in 1964) and the book went on to win the Pulitzer Prize.

“Profiles” eventually led to the creation of the “Profiles in Courage” award, an annual award which honors displays of moral and political courage reminiscent of those President Kennedy highlighted in his book.