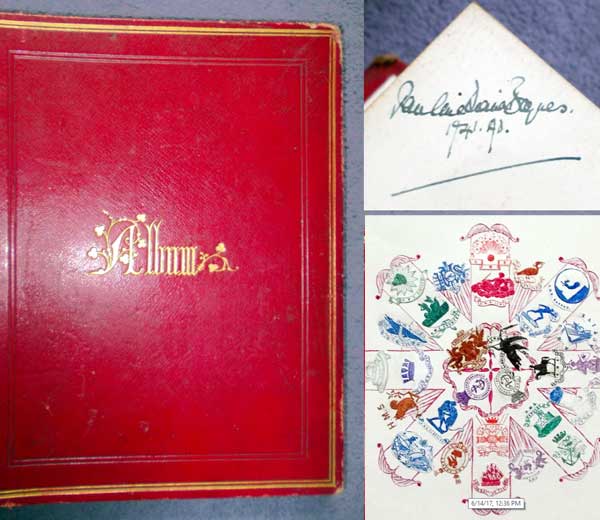 This little gem was picked up in England and is an unusually personal piece tied to the works of famed authors C.S. Lewis and J.R.R. Tolkien.

A vintage red crest and monogram album / scrapbook was once personally owned by illustrator Pauline Baynes, world famous for her art depicted in the works of C. S. Lewis and J. R. R. Tolkien including The Lion, the Witch and the Wardrobe, The Chronicles of Narnia, The Lord of the Rings and The Hobbit.

Baynes’ personal album features crests and monograms dating as far back as 1890 and also includes her signature, along with a private black and white photograph dated 1961. The photo depicts a children’s party with a lady standing in the background who very much resembles Pauline Baynes.

The authenticity of this piece has been verified by the most prominent website on Miss Baynes, paulinebaynes.com, who received further verification through Baynes’ step-son-in-law, Alberto Ceccatelli. These gentlemen were most helpful and very excited about this rare and unusual find connected to one of the most prominent artists of our time.

Some of the borders have been hand coloured; whether this colouring was done by Pauline herself is not known. Both front and back boards are detached.