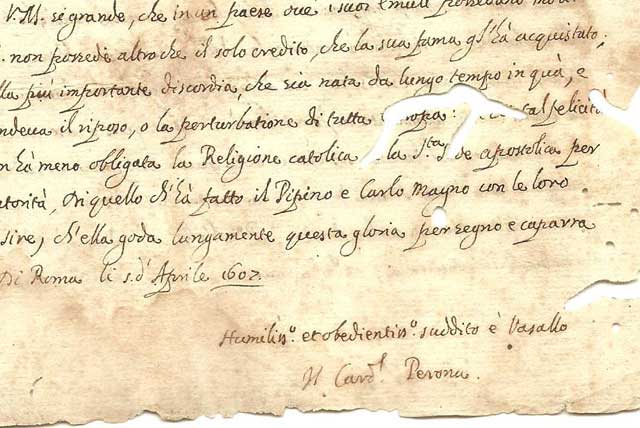 The handwritten letter relates information about the Cardinal de Joyeuse and the negotiations he was carrying on with Venice to extract Pope Paul V from the embarrassment of having put Venice under an interdict that no one was paying attention to.

Joyeuse was not entirely trusted by Henri IV, since he had previously been on the side of Henri’s enemies since the Republic of Venice authorities rejected the pontiff’s request, he excommunicated the senators on April 17, 1606.

The Pope also placed a ban on the entire territory of the republic. King Henri IV, a traditional ally of the Venetians, suggested Cardinal de Joyeuse as a mediator and the pope accepted.

In November 1606, the Cardinal left from France and arrived on February 14, 1607 in Chiozza and went to Venice two days later. After masterful negotiations, he obtained the abolition of the ban from the pope, and after the imprisoned clerics were handed over by the Venetians, he published the abolition of the papal censure on April 21. After the re-establishment of the diplomatic relations between Venice and the Holy See, the cardinal returned home in the spring of 1607, his authority considerably enhanced. Legate a latere to represent Pope Paul V at the baptism of the successor to the throne, July 17, 1606; the ceremony took place on September 14, 1606 in Fontainebleau.

Some of the other text discusses the “Pope’s going under another guise,” and also the imprisonment of priests. Much of the text also talks about Sigismondo Gioioso who was the 11th Cardinal to question Galileo.

The letter has been signed by Jacques Davy (Cardinal) du Perron and also by his secretary, Denis Simon de Marquemont. All Cardinals within this letter are well documented and of great importance within the Catholic Church’s history.

This document is quite fragile, as to be expected with a 400+ year old letter. Most of the text is legible.