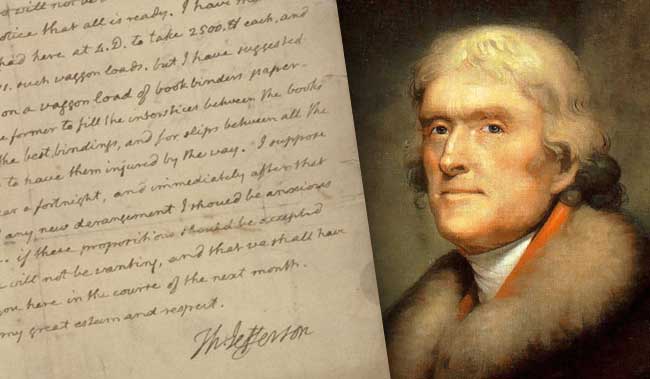 Over the years and throughout his career, Jefferson amassed an awe-inspiring collection of books covering an enormous range of subjects.

“I cannot live without books.”Thomas Jefferson

During the Revolutionary War and post-war period, Jefferson continued to acquired literally thousands of books on all manner of topics such as history, philosophy and fine arts to name a few.

Arranged on endless shelves in his home library at Monticello, Jefferson, who was famously quoted as saying “I cannot live without books,” devoured all manner of reading, helping to broaden his knowledge of the world beyond what he was able to absorb in his own life experience.

In what was a pretty incredible gesture, Thomas Jefferson wrote to newspaper publisher Samuel H. Smith asking him to offer Congress his personal library as a replacement for the books that were destroyed.

Jefferson stated that he would accept any price determined by Congress, telling Smith: “I do not know that it contains any branch of science which Congress would wish to exclude from this collection . . . there is in fact no subject to which a member of Congress may not have occasion to refer.”

While the collection of Thomas Jefferson’s books numbered somewhere between a whopping 9,000 and 10,000 volumes, historical records indicate that Congress ultimately purchased only 6,487 books, effectively doubling what had originally been in the nation’s library.

In the 175+ years since that auction, portions of the library have scattered across the globe and into the hands of private antiquarian book collectors.

Thankfully, the surviving volumes from Jefferson’s library are currently part of the Rare Book and Special Collections Division of the Library of Congress in Washington, DC, and have been part of an ongoing public exhibition since 2008.

The Library of Congress is in fact attempting to reassemble the collection as it was originally sold to the Congress in 1815.