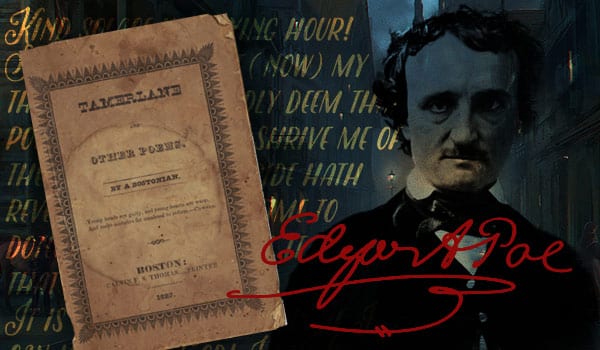 “Once upon a midnight dreary, while I pondered, weak and weary, Over many a quaint and curious volume of forgotten lore…”

Ah, and what a curiously forgotten volume is a little booklet rather dully entitled “Tamerlane and Other Poems”, published in 1827.

Though the works may not be the stuff of legend like “The Raven” or “The Fall of the House of Usher”, this Edgar Allan Poe book is the holy grail of historic American literature.

In 1827, the man who would become known as the master of literary horror was just 18, excited to begin his career as an author and to make a name for himself. He turned to another Boston teenager for help in getting his first works published.

Using his own money, young Edgar Allan Poe paid the teen-printer – who had, at that point, only produced flyers, labels and other small bits – to publish his collection of poems as a 40-page pamphlet.

An estimated 50 copies were produced, and the finished work – titled “Tamerlane and Other Poems” – hardly turned a head when it hit contemporary bookshelves.

Today, however, some 190 years after that unassuming print job in New England, Poe’s little pamphlet is considered one of the world’s rarest books. Only twelve copies of the original 50 or so are known to exist.

A (weak) collection of poems by “A Bostonian”

Rather than using his own name, Poe’s authorship on “Tamerlane” is listed simply as “A Bostonian”, and he begins the book with an apology for the (in his eyes) sub-par quality of the poems printed within.

“Why they are now published concerns no one [but the author],” Poe writes in the introduction. Evidently, literary critics of the time agreed with Poe’s evaluation of his unrefined early work.

Heavily influenced by Byron and Shelley, “Tamerlane” is a 403-line poem telling the story of a 14th-century warrior who abandons his love in favor of power, and later comes to regret his choice. This curious Edgar Allan Poe book includes eight other poems, including “Visits of the Dead” or “Spirits of the Dead”, “Evening Star” and “The Lake”.

The world’s most sought-after Edgar Allan Poe book sells for over $600,000

During the 19th century, this rare Edgar Allan Poe book was hardly known to have existed. The first known copy was discovered in 1859, a decade after Poe’s untimely death, followed by a second copy in 1874.

In December, 2009, a fairly worn original copy of “Tamerlane and Other Poems” sold at Christie’s auction house in New York for a whopping $662,500, establishing a record auction price for a piece of American literature.

Previous to this record-setter, the last known copy to have sold at auction fetched $250,000.

Many facsimiles look very nearly like the original and without examination could easily be mistaken by the casual observer for the high-value edition. These can easily be had for comparatively little money, sometimes ranging from $35 – $400, depending on a few factors.

The work was also naturally reprinted in collections of Poe’s poetry, and can even be “read in its entirety online.